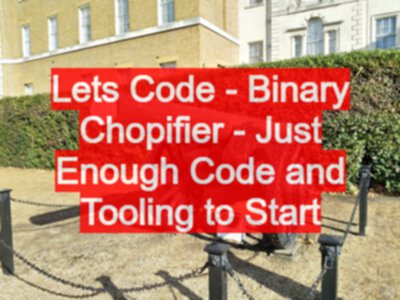 TLDR; “Let’s code a Binary Chopifier” which I plan, code as prototype to plan in an @Test method, test interactively, experiment, and release as an @Test.

I want to create a few more examples of “Java in Action” and I’m doing that in some YouTube videos and blog posts that I think of as “Let’s Code”. First up is “Let’s code a Binary Chopifier” which I plan, prototype to plan, test interactively, experiment, and release to Github.

When I was recording - Let’s Explore Google Search I made a note to write a binary chopifier.

In this series of videos we are going to create the binary chopifier and add it to Test Tool Hub.

First thing I did was make notes on what I wanted to support me in testing:

Guess which is easier?

So I write a tool.

Thinking through an algorithm

The plan above represents a basic output to support me as the tester.

Really all I want is the chop and the value, but I used inc to help me calculate the chops

Start by writing a ‘@Test’ which does this

Which gives me the output

Which isn’t what I was looking for, but makes sense since on the last increment it is zero.
Perhaps then, inc isn’t inc it is diff between end and chop point.

So rather than ‘add to’ the start, I should ‘take away’ from the end

Which gives me my original plan:

But since I’m working from the end, I’m wondering if what I actually do is just keep halfing the difference:

And is much simpler.

And since this ‘test’ is a useful ‘tool’ for me - I’ll stop there for this video. And next I’ll start refactoring this out into a library for binary chopping so that I can then use that in the Test Tool Hub.