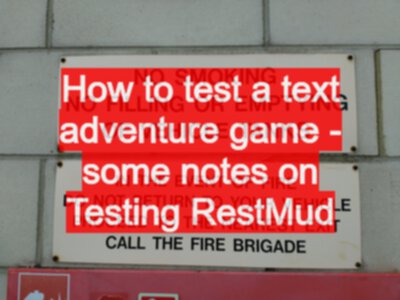 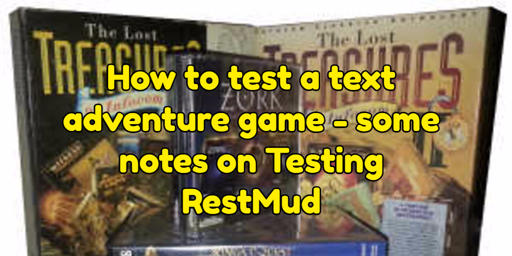 I’m getting RestMud ready for some workshops later in the year and this means:

As most of you reading this will realise - that means as well as developing it, I need to test it.

The basic game architecture is:

If you are interested in text adventures then I can recommend Jeff Nyman’s series of blog posts on interaction and testing with an inform text adventure game.

How would you test that?

For a moment, I’d like you to think about how you would test that.

Here is what I do at the moment.

I’m using traditional headings here so it fits the general understanding of ‘how we test stuff’.

The above misses out:

So I guess I have to do more than this.

I have ‘games’ and ‘game engine’ I want to make sure that when I instantiate the game engine with a game that I can play it so I have @Test methods to check the functional integration between the main internal packages.

But that misses out… a bunch of stuff we already mentioned.

I want to make sure that the Game combinations work e.g. in room 12 when you examine the key, that the troll appears and growls at you.

But I don’t want to play the whole game to get to that point, I just want to make sure that that set of conditions works. And some conditions mean that some other conditions don’t work (there are multiple paths through the game), therefore I don’t want to end to end test all of this.

By using the game interface I don’t have to issue, or parse JSON, because I’m working with internal game objects. I’m testing - just below the REST and Web API.

I want to make sure that a player can complete the game, therefore I create a ‘walkthrough’ test. Again still in the ‘game’ rather than the REST and WEB API.

This works for single player, non random games, where:

These instantiate the game, so it is in default state and then they start to play the game by issuing commands:

I think these are pretty readable, and I use high level methods to create a ‘Test DSL’ for writing these @Test methods.

At the moment I have one ‘walkthrough’ test per game.

The ‘walkthrough’ test above uses a ‘Test DSL’.

This also writes out a CSV file with all the commands that are entered.

I have a REST API test which reads the file and sends the requests to the REST API, this outputs the request and the responses.

At the moment I review the output rather than automatically assert against it.

In the future, I will re-use the walkthrough test but the Test DSL will have a backend that uses the REST API rather than the game API.

The Rest API is very similar to that described in my Tracks REST API Testing Case Study but I’m using Jsoup and Gson as my HTTP and JSON parsing libraries.

This is semi-automated at the moment with a blast of messages which I review.

I decided to build a ‘bot’ to ’test’ the REST API i.e. some code that wanders about the game doing stuff. This will help me flush out ‘unexpected’ game conditions and I can randomise various inputs on the API to see if it works.

I’m doing this because:

At the moment I have created a very ‘stupid’ bot:

At the moment my bots are a colletion of ‘strategies’:

You can probably guess what the different strategies do.

I play to add game specific strategies so that the bots can solve problems and not get ‘stuck’ in one room - which currently happens on one of the maps.

This allows me to simulate a user that doesn’t know what they are doing and wanders around pulling things and taking stuff in different order.

Bots are a form of Model Based Testing. A collection of strategies is the ‘Model’ that the bot uses to interact with the application and the bot implements a traversal strategy (currently -randomly choose a strategy and execute it) to execute.

At the moment I don’t really care what the bots do. I’m checking for - no server errors, and no exceptions in the bot or the server. Also I use them for background load when I’m performing exploratory testing through the GUI or the REST API.

I was thinking of using JMeter or Gatling for performance and stress testing.

Instead I decided that I wanted a more flexibile strategy which re-used the existing REST API testing work.

I could probably re-use my API abstractions but decided it would be easier and faster just to make sure that my bots were threadsafe and that I could start up multiple bots.

I introduced a ThreadedBot which I can start, and stop, but it will autonomously ‘play’ the game in its own thread, interacting with the other users on the game.

It is quite annoying to play alongside the bots as they have a habit of closing doors that I have just opened.

But in this way I’ve been able to use the GUI and play the game with 150 bots running in the background using the API every second or so.

I need to introduce a few more strategies and reporting capabilities in the bots but it is a fairly low tech but scalable approach to automated simulation of multiple users.

Sharp eyed readers might notice a similarity between the ‘strategy’ approach and the ‘screenplay’ pattern and there are certainly lessons for me to learn in the screenplay pattern for readability but I’m refactoring my way to better bots through usage.

I released a ‘walkthrough’ of the RestMud public single player game.

I certainly didn’t write 30 pages of Walkthrough - that would be madness given that the game has a tendency (nay, obligation) to change.

Instead I expanded my ‘Test DSL’ to output markdown as it executes, and report some of the output from the game.

This allows me to have an executable @Test:

I experimented with outputting a GraphViz diagram at the same time but the map layout was not good enough so I ended up creating them manually in draw.io for my own purposes to support my exploratory testing and thinking through the game mechanics.

I explore this system all the time.

When I write the code I use TDD and explore scenarios.

I write games which are designed to explore the game DSL and create different use cases for the game.

I use Postman to interact with the REST API, and I use the game through the GUI in Chrome. (The game HTML is such that I view cross browser rendering and interaction as low risk.)

I still have a lot to do.

But of course, I do not need to do all of this prior to my workshops.

Hope this gives you some ideas that you could use in your own testing and automating. And if you have any questions or comments then feel free to let me know.

<< RestMud Text Adventure Game for Testers Walkthrough
Should I test at the GUI Level or the API Level? >>