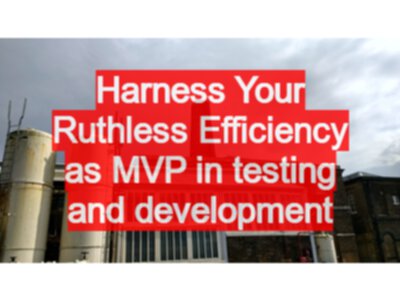 Harness Your Ruthless Efficiency as MVP in testing and development

TLDR; Ruthlessly look at your process and incrementally improve your efficiency. Take the same attitude when testing and developing and harness MVP as often as you can. 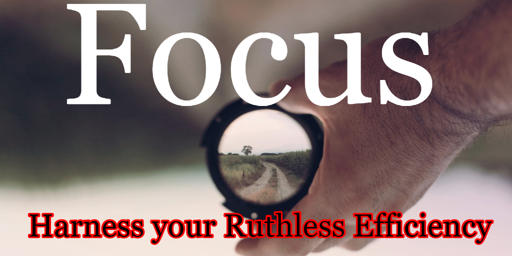 In this post I’m going to describe focus and how you can apply that in your work, not just for testing but for software development in general with examples.

On the morning of 17th Feb 2017, I created an Instagram video on ‘focus’ and it was about… how ruthlessly efficient we can be if we focus.

And it was partly inspired by Monty Python with their Spanish Inquisition sketch. They have three main weapons, four or five, but it’s surprise, fear, and ruthless efficiency.

I covered two on Instagram earlier in the week:

Then it came around to ruthless efficiency.

As an example for how to harness this I’m going to look at a tool that I built the day before.

I was experimenting with Instagram because Instagram has an interesting feature where you can’t link to anything in Instagram. People end up putting links and then they’ll say in the post “See the link in my profile”. Then they’ll continually update the link in the profile.

I had this idea for a tool, a big tool that was going to do lot and lots of stuff. But a large todo list would not help me deliver fast. What helps me deliver fast is:

I found a commercial product that I could use to do something very similar and that looked quite good. But I wanted to experiment with more API work and more API libraries.

My research led me to clarify my goals:

I also noticed that with the Instagram API there are a couple of things that I can do without needing to set up a developer account. If I could use those features to get enough information then I could get something out fast.

My page requirements fundamentally came down to two API calls:

By focussing I was able identify the bare minimum.

In IT we have this concept of a minimum viable product. “What do I need to do to get something out the door now?”

My minimum viable product could have been:

Instead I decided to create a minimal viable product of:

Later I could build something that would create the JSON files automatically.

I then wrote some PHP that:

I had that live, and that was generating the JSON files within a half an hour or so.

I had something live that was my minimal viable product.

Then I wanted to:

At each stage, I went live.

I have something to build on.

But I’ve met my basic need and I did that by:

Work with this notion of a ‘focus for ruthless efficiency’.

You can still keep track all the wants. I’ve got a big list of wants in my Instagram notes there of how I want to expand this. But that’s not my immediate focus.

Focus can change every day.

Work out what your needs are now, work out what you have to tackle now. Figure out how you can do that in a ruthlessly efficient style with minimum waste to add immediate value.

Can you use the tools that you already have?

The ability to focus. And harness your ruthless efficiency. Is what is really going to make a difference when you’re developing software and when you’re testing software.

How can you become more ruthlessly efficient?

<< Should I test at the GUI Level or the API Level?
UKStar 2017 - Test Automation and People Conversation >>