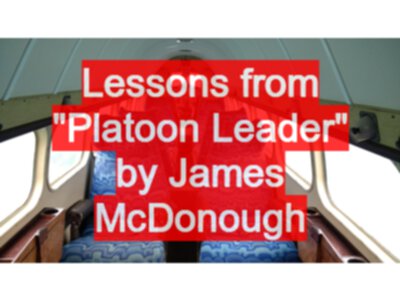 TLDR; war is horrible. Lessons can be learned from it. Would a distinction between defensive measures and pursuit, help your testing? I often see many test strategies that are highly defensive, but low on pursuit. 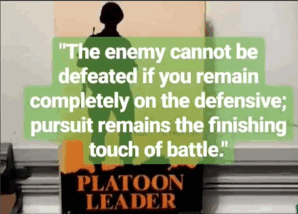 I do turn to books written by people who have fought in the army for lessons on tactics and leadership. I read “Platoon Leader” by James McDonough because it was a first hand account of a rookie leader in the Vietnam war.

I recommend the book to you.

James starts the book as a fresh faced leader fresh out of West Point and choosing to serve in the Vietnam war. This book presents some of his experiences as he grows as a leader.

I took note of a few quotes early in the book about leadership which many people new to leadership and management may experience.

Often we learn how ’not’ to lead by seeing other leaders in action and we deliberately choose to never lead like those people.

“The shamefulness of his words hit me like a club. He was not the leader of this platoon. He felt no responsibility for the mission; he felt no compassion for the men. In his mind, the other members of the platoon existed for only one reason: to protect him, to keep him alive. The men were expendable; he was not. He had reason to live, they did not.”

But as a leader we are very often on our own.

“I was alone. That was my first sensation as a leader.”

So how do we ensure that we don’t slip into the dark side of self important ’leadership'?

“From that point on I began to watch myself carefully. Was I really what I thought I was? Or had I deluded myself as effectively as Rolfe had.”

Constant debriefs with yourself and retrospection. Debriefs seem to be a big part of what it takes to learn from the actions in the field and ensure that your platoon or team take the same lessons and learn which tactics are acceptable and which are not. James McDonough mentions debriefs a number of times in the books and he does not favour himself during those, he went out on patrol and he critiques his part in the patrol as hard as the rest of the team.

James McDonough was hands on. He did what his platoon did. Because if he didn’t he “might also miss my best chance to appreciate their perceptions, needs and attitudes.” It was also a way to gain their respect.

But he was never a peer he was always apart from them, despite developing a bond with them.

“Although I was getting to know the men - their fears, the lives they had left behind, their hopes for the future - I kept my own emotions to myself I believed that to be the only proper course. I was the final authority in that piece of the world, the arbiter of right and wrong, life and death. I was afraid to put a human face on that authority.”

The last note I made was from page 108 - after that I was too sucked into the horror of the experience to make many notes. I will revisit the book again later.

And the last note reminded me that many of the test approaches that I see teams adopt overly emphasise the defensive.

This isn’t how I have thought of the testing before, as ‘defensive’. But James Mcdonough makes the point that:

“The enemy cannot be defeated if you remain completely on the defensive; pursuit remains the finishing touch of battle.”

Very often when teams have a test management tool based around Test Scripts and Test Cases they never adopt any flexibility.

Also most approaches to the incorporation of automated execution into a test process seem to be used for purely defensive purposes. When we have a new build we run all the automated Test methods to ensure that nothing has been impacted - a purely defensive measure.

We do need to expand our scope and coverage to pursue new areas of risk and new sources where we might find problems.

I can’t imagine pursuit as anything other than an exploratory activity.