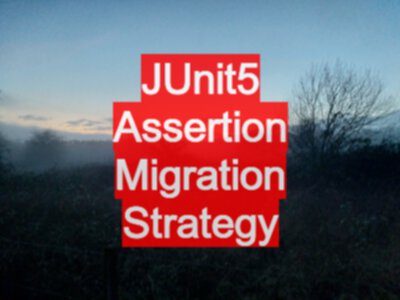 TLDR; Rather than migration your assertions line by line, create an abstraction class to represent the new implementation and then perform inline refactoring.

I’m experimenting with migrating my projects to JUnit 5.

Many of the “how to migrate to JUnit 5” blog posts show differences, but not a lot of strategies. I used a Branch By Abstraction strategy to migrate JUnit 4 Assertions. This allowed me to experiment with using JUnit5 assertions or AssertJ assertions.

Differences between JUnit 5 and JUnit 4

The main differences between JUnit4 and JUnit5 seem to be: annotations, rules, and assertions.

But assertions have the issue that in JUnit5 the messages have to go at the end of the parameter call list.

A direct conversion to JUnit5 would be. But that would be incorrect because this means assert that the String “name should not be null” is not null, and if it is, show the error message in the variable name. Which is the opposite from the current JUnit4 test.

Assertions are the main issue I have to solve in my migration.

Useful Articles, but Not Viable Strategies

The following articles are all useful, but when they do present strategy for migrating, the strategy is a lot of manual work to check the assertions.

None of these seem to present a strategy I like for migrating to JUnit 5.

Going line, by line, while your code is ‘broken’ doesn’t seem like an effective approach.

The first steps I took were:

This was a quick view of “What doesn’t work”.

For more complicated projects we might also need to add the migration support package.

Since Abstractions are the main issue I face, I thought I might investigate Assertion libraries, after all if I’m going to have to change all the assertions, perhaps I should change them all to an Assertion library.

AssertJ uses an Assertions package, and has a fluent interface so might even be easier for beginners because of the code completion.

AssertJ has ‘soft’ assertions to assert on all assertions and report on all even when one fails. Which is functionality in JUnit 5 as well, but I don’t need to use JUnit 5 Assertions to get it.

I would have to read these to evaluate them first.

I have used Hamcrest before. But stuck to JUnit4 because it was simpler and had more code completion.

Since I want to evaluate the different libraries.

I could use a Branch by Abstraction approach.

Currently my code has

I only use a subset of “Assert” so I could easily create an “Assert” class which allows me to migrate to JUnit 5 without changing my code e.g.

If I had the above then I could simply import that into my Test Class, no need to change the code in my Test Class and then I have used JUnit 5 Assertions.

If I used this throughout my code base, then instead of working on Assertion migration at a line by line level, I could use IntelliJ to perform an inline refactor for each method and it would change my JUnit4 code from

and change it to JUnit 5

I haven’t seen this strategy mentioned in any of the migration blogs that I read.

Branch By Abstraction to AssertJ

Because this is a Branch by Abstraction, I could experiment with different implementations. I could create a AssertJ implementation of my Assert abstraction:

By changing the imports I could switch between AssertJ or JUnit5 without changing my test code until I am happy to settle on one of the approaches.

I could clearly make this even more flexible by coding to an interface and having the Assert wrapper be a configurable factory which switches between the two, but I don’t need that degree of complexity.

This seems to be a simpler approach to assertion migration than I’ve seen mentioned.

I’m not sure why this isn’t the most communicated migration approach.

I created a video showing this approach in action below, and you can see all the code on github: