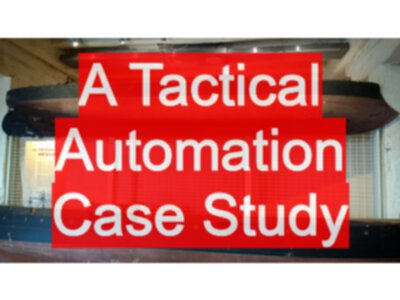 TLDR; Automating is not limited to “Test Automation”. With the ability to code, we gain the flexibility to approach problems in multiple ways. We can refactor tactical code to become strategic code.

I needed to migrate some data from one system to another. To do it manually would have taken me about 1.5 to 2 days. I automated tactically and was done in 2 hours.

I have a full video report of this work on Patreon

I needed to automate migration of URLs from one system to another.

Since I was only ever going to do this once, I consider this tactical automating.

Getting Data Into A System

The System I needed to move data to did not have:

But, it is a web application, and it has a GUI.

In Automating And Testing a REST API I referred to this as “App As API” and the book contains a longer write up of this approach.

The code is simple:

Getting Data Out of a System

I tried to use the “csv export” from the System, but it didn’t have all the fields I needed.

I raised this with the vendor, and they confirmed it was a bug that they will fix, but I’ve already worked around the issue. Tactical automating is often used to workaround bugs and issues.

This is a JavaScript heavy GUI, so I can’t use an HTTP request to parse the data from the HTML.

In these circumstances I automate in the Dev Tools Console.

Also a grasp of CSS Selectors can help.

Very often when I’m working with JavaScript from the console I end up building a string as I loop over lots of data:

I also used Regex find and replace in Visual Studio Code. This is becoming my favourite Markdown and text editor.

The above allowed me to convert a PHP Array to a Java Array of objects.

All of the code was tactical.

No doubt some of the code snippets I’ve included here seem like ‘bad practices’. And they might be if this was strategic.

If you want to see this in action then I have a video in Patreon, but hopefully there is enough here to encourage you to learn some of the tactics and approaches that I used for tactical automating.

<< Pro Con Critical Evaluation - but What If?
How to install Bonobo Git Server On Windows >>