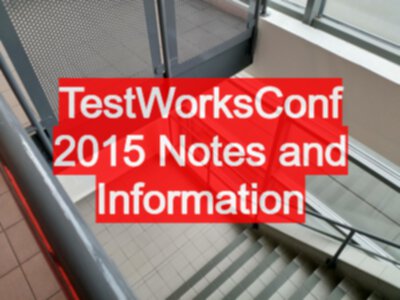 I have added the slides for my TestWorksConf keynote to my TestWorksConf page. So if you’d like to see them then you can head off here. This post is to describe the rest of the conference and link to useful sources of information I think you’ll find interesting.

The conference (#testworksconf) was probably the most ‘hands on’ conference I have ever attended. Xebia, the organisers, created a usb stick with a VM which had all the software that would be used in the workshops and demonstrated by the speakers so that the conference attendees could hack along with the talks.

Because of the information provided at the conference, I have had my first exploration of Gatling. I was also able to spend some time with Erik Swets and he helped me use Gatling against Flood.io (which I was unaware of until Erik showed me).

Ivan Shubin provided a really good interactive demo of his Galen Framework visual testing tool. Galen has now bumped its way a little higher up my investigation todo list and I think is worth checking out.

Maarten van den Ende and Adé Mochtar provided an overview of Selenium Grid in containers using the 2.47.1 Docker images and expanding it further with Mesos. (slides)

John Smart provided the closing keynote with a demo of his Serenity tool, and more interesting the ‘Journey Pattern’ Actor approaches he uses to cut down on the amount of code in page objects and other abstraction layers. It was different enough from the type of approaches that I covered in my Abstractions talk that I need to look through John’s example code in more detail. Fortunately, John also used the TodoMVC app as his example target.

You’ll be able to see Erik and Maarten talking at Agile Testing Days this year, covering the topics above.

Also at the conference; an overview of updates to FitNesse, an intro to the Robot Framework and Cucumber.JS/Angular and Protractor. And a very interesting introduction to the Mox Angular mocking library.

Unfortunately there was too much on for me to go to every talk. A very interesting conference, very hands on, with lots to learn.

Hopefully I’ll be able to attend on future years as well.