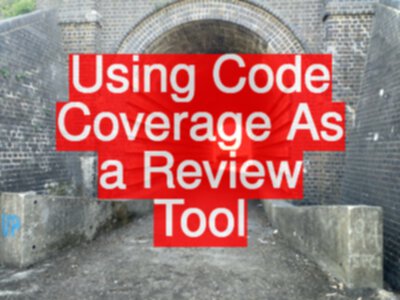 TLDR: Code Coverage can help with code review when we focus the coverage metrics on the code we want to review and format it to support coverage metric analysis.

I use Code Coverage as a tool when reviewing code. In the example for this post, I’m using code coverage of a live project I’m working on, prior to refactoring code. This helps me understand gaps, refresh my memory about the code, and make an assessment about the risk of something not being picked up during my refactoring (if I accidentally make a change in behaviour).

In this video I demonstrate the use of Code Coverage to help me review code. You’ll learn:

The project that I am working in:

And the main test code I’m looking at:

I have a Unit Test here which is targetting a specific class.

Which is targeting the class

If I run the test then by default it runs against all the classes in the package.

Which is great, but that can give me an inflated sense of coverage.

To review code, I want to zoom in on a specific class, so I change the run config

When I run the test with coverage now, I only see coverage for the test I want to review.

If I went by numbers, then I might not expand any further.

But, because of the way the code has been written, I have an inflated coverage metric.

I ’exercise’ a lot of code, but none of it was covered by the test.

I don’t have a test that issues a DELETE method.

But the first line with the ‘if’ method has been ‘covered’ because a ‘GET’ test hits all the if statements in my code, and the code says does "GET".equals("DELETE") no, then ignore this if.

I can achieve increased code coverage if I change the fomatting of the code even though I don’t amend any tests.

e.g. my code coverage looks higher when I review the code if I format it as follows:

In the IDE, when I look at the coverage, it shows the full if condition as ‘covered’, but actually I only evaluated the first Boolean expression, I didn’t need to evaluate the second because it is an AND (&&) condition.

I have to be really careful when reviewing condition or predicate coverage to make sure the combination of boolean conditions has been exercised, because I don’t see that from the coverage report.

Formatting can help a little with that, but I still need to review the test in detail to see the actual coverage.

When I review the code I can see that some of these lines are pretty important.

I can achieve a lot of reported coverage through exercising the code because the condition lines are exercised but very few of the tests actually exercise the actual line of code I want to test and we can visually see that in the report.

So even though I have a high code coverage number.

By looking at my executable code, I haven’t covered very much at all.

But I haven’t covered

This is why I don’t really like ’limits’ on the line coverage, e.g. “76%” in this case is clearly not good enough.

I have high code coverage, but low requirement coverage.

Code Coverage is not Test Coverage

Looking at the code though, I can see that I don’t need to have a lot of combinations of condition coverage because all the if statements are AND (&&).

If they were OR (||) statements then it increases the amount of tests I need to add, even though it would not increase the code coverage metrics.

People hear different things when we talk about ‘coverage’.

Coverage is always about ‘model’ coverage. In this case the model is the code, and the coverage is achieve by running Unit Test code.

My “Test Coverage” is really referring to the ‘model’ that results in the creation of the tests. Not the Code. The Code Coverage is a side-effect.

If I haven’t covered all my code, with my tests, then perhaps:

I filter my Run Configuration to target the individual class to support the review.

Other classes would require additional tests, even once 100% coverage is reported, because of the condition coverage we need to aim for.

This content was released early, and ad-free, to Patreon supporters with a full transcript.