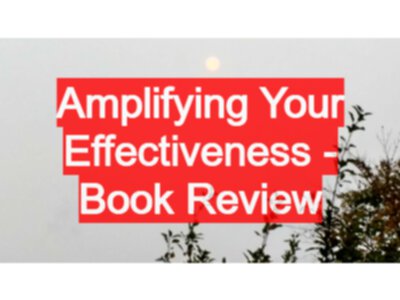 A book review of the congruent Classic, Amplifying Your Effectiveness, suitable for everyone.

The trend in software development at the moment appears to be towards zen and embracing the relationship based approaches of psychologists such as Virginia Satir. As exemplified by the agile movements (extreme programming, agile modelling) and this book.

With a title that could result in it being misfiled in on the self help shelf of the bookshop, next to Mr Anthony Robbins, this is a very good example of the current trend, but then what else would you expect from the stable of Gerald M. Weinberg.

Gerald Weinberg has always brought lessons from psychology (his book “The Secrets of Consulting” even has a foreword by Virginia Satir) and his work has always been pragmatic. As this is a collection of essays from a variety of authors it is not a typical Weinberg book. Gerald Weinberg writes the excellent introductions and contributes one essay. Testers will probably most quickly recognise James Bach’s name among the authors.

The essays are a selection from the outpourings of the speakers on the “Amplifying Your Effectiveness” conference initiated by Weinberg. Some of these essays may be familiar to readers who follow a congruent and pragmatic development path as none of them were produced specifically for the conference, they were chosen before the conference to provide “…a preview of the hosts of the conference…”

The result is a book that is wide ranging in approach and style. All the essays are well written and short. It is easier to read than a collection of essays by an individual author, say Weinberg or Constantine (although both their essay collections are particularly good), since each author has a different approach and the similarities that exist between the essays are a result of sharing the same basic philosophy and pragmatic approach.

There are two testing essays by James Bach, one of which is an anecdotal walk through the stages of a tester’s development (similar to Beizer’s introduction but personal to Bach) and I hope that most testers can identify with it. In the later stages of the book James Bach looks at the veracity of some of the testing beliefs that are commonly held on a project: must check each test on each build, need to document all tests, must involve test early in the life cycle, must write all tests before execution, and more. This is very much in accordance with James Bach’s exploratory testing approach and his focus on the pragmatism that must be applied to all testing projects.

All of the essays deal with effectiveness in some shape or form: how to attain it, how to control the things that influence it, how to recognise it or its absence, effectiveness of communication, the results of ineffective decisions, hiring quality staff, effective planning and effective relationships.

Some of the essays overlap slightly but, where they do, each of them adds a nuance and focus that was not present in another article. Few people involved in the industry will not be able to relate to Becky Winant’s “Manoeuvres to disable a team” and can all probably add a few more manoeuvres to the 7 presented.

As a collection, it really does embody its philosophy and has been put together with an observing eye to ensure that the essays congruently aid the understanding of the reader and serve as small nuggets of wisdom with an easy going smile.

There is a vast array of information in this book and many truisms here, but more importantly there is enough room that you can slot in your own and the book helps open you up to the experiences you have already learnt from.

I’ll leave you with one of the closely guarded trade secrets of planning that Rick Brenner discloses in the form of a Haiku. This is number 8 of 10 and most testers will be familiar with it:

There is no more time,
but the work is unfinished.
Take more time from Test.