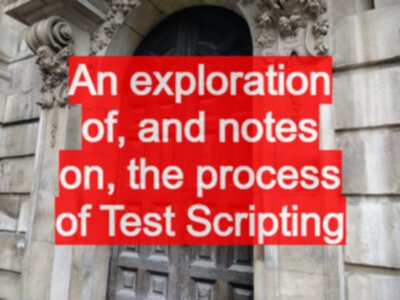 An exploration of, and notes on, the process of Test Scripting

An exploration of, and notes on, the test scripting process:

This text will explore the process of test scripting. It will do this through analogy to the development process and will try to show some of the things that testers can learn by studying development methodologies and best practises. The essay is not complete description of test scripting, it is an introduction to test scripting and to the study of development techniques but if you only take one thing from this essay take this:

Test script development involves the same processes and techniques used when constructing software programs, any experience that testers have had in the past when scripting is an experience which has been shared by the development teams when developing. Testers and developers are more alike than different. Testers should study developers and their techniques; developers should study testers and their techniques. We are all software engineers, we just have different areas of specialisation, but it is foolish to specialise without knowing the general techniques of your discipline.

A test script is the executable form of a test. It defines the set of actions to carry out in order to conduct a test and it defines the expected outcomes and results that are used to identify any deviance in the actual behaviour of the program from the logical behaviour in the script (errors during the course of that test). In essence it is a program written for a human computer (tester) to execute.

Testing uses a lot of terminology. In this text I will use the following definitions:

Testers are familiar with each of these stages in the context of system development and its relationship to the construction of tests. However a Test Script is a program and as such it has a life cycle that parallels that of the system development in microcosm.

Fortunately for testers, tests are derived before building scripts. The test description itself should contain the requirements for the test script. (The process of test case construction and the corresponding requirements analysis techniques are outside the scope of this text.)

Or, representing the above diagram as a graph:

The graph provides us with the following two Meta paths:

A test script is an interesting executable model as it only embodies the sequence construct. Leading to the familiar situation where testers write numerous scripts around the same area of the program, each script differing slightly from the one before:

It is obvious that this situation occurs because each test script is an instantiation of one of the script model’s Meta paths, each script is a single sensitised model path.

Test Scripts avoid the concepts of selection and non-deterministic iteration because each test script should be run in exactly the same way each time it is run in order to aid repeatability. The tester is given no choice when executing a test script but to follow it exactly and consistently, this allows errors, once identified, to be demonstrated repeatedly and aids the correction of errors because the exact circumstances surrounding the execution of that test were specified.

One of the software development tenets is the avoidance of repeated code. This aids maintainability, can often aid readability and allows re-use, which increases the speed of construction of similar procedures.

Iteration constructs are used when constructing test scripts for the same reasons.

It is perhaps unfortunate that the test tools which testers use, particularly when constructing manual scripts, do not make re-use or iteration simple. This leads to a more informal implementation than would be found in program code:

Example 1 above uses iteration to avoid repeating the same set of steps in the script. However, the same steps (3-12) will typically be repeated in other scripts so re-use isn’t facilitated. This is primarily because most tools which testers use for manual testing will not support sub-scripts or procedures.

When testers do use loops it is obvious from the Meta model path description of the test script what they are doing. The tester will have identified a particular instance of the Meta model path and in order to increase maintainability of the script the tester finds it more appropriate to use a higher order description as the actual test script itself.

Use of the Design

A design that represents the flow of control that scripts can select particular paths from serves a number of purposes:

If no design is produced then testers will have to assess coverage by examining the discrete set of tests and identify missing paths or actions not taken. Typically missing paths won’t be noticed until the tests have been executed a number of times and the tester has built up a model in their head and realises that they have never executed Action 3.

This obviously depends upon the design technique used and the availability of tool support. Testing models, particularly for scripting, can use models that do allow automatic code generation: Jackson, Flow Charts, State Transition diagrams. Typically tools exist to draw the models, and tools exist which can take the models and produce entire programs. Test scripting requires tools that can produce programs of the chosen path through the model. Testing may have to design and build their own tool to support this.

Each test script should follow the path identified from the design and as such should be fairly easy to construct if a design has been produced.

Test Scripts are typically represented by a series of steps, each step being given an id or sequence number, an action and a result.

When writing a test script the writer must take in to account the level of knowledge that the tester (the person executing the test) will have. If there is not enough information then the tester may not be able to run the test, or they may run the test but, having misunderstood some of the actions, have actually run an entirely different test which may lead to a false positive or false negative result being reported.

There are also time pressures that affect the writing of scripts. Unlike a computer program a script can be poorly written but can still execute provided the human computer has the correct knowledge.

The above script could be written as: “save the file using the file menu and then check the date”. This is possible when the person executing the script is the same person writing it. It doesn’t aid re-use, repeatability or maintainability but it can still be executed. A computer program cannot do this, a computer program can skimp on the documentation and the computer can still execute the program, but the computer has no more information than that presented in the program and the instructions presented to the computer cannot be artfully vague.

Development is rightly concerned about maintenance and ensuring that their code makes sense now and will make sense 18 months in the future when they have to update it.

Testing should have it easier as the transition from design model to test script should be an automated process but typically testers don’t have an automated mechanism for doing this and end up doing the translation manually.

It can be a lot of work to document each individual test script to a precise level.

The process of constructing tests and executing them should give testers an appreciation of the difficulties of program construction. Defects slip into test scripts as often as they slip into programs. This should make testers more sympathetic towards the trials and tribulations of their development peers but for some reason, some testers do look at systems with disgust and wonder what on earth the developer could have been thinking to allow such an obvious defect to slip through. As a corollary, developers know how hard it is to program and know how easy it is to slip defects in to systems, but are often scornful towards the tester who has a bug in their test script.

We can blame these attitudes on human nature but they are also symptomatic of a competitive environment where the test team and the development team feel that they are in opposition with one another. Both sides have the same problems and each can try to learn from the other.

Testing a test script can be tricky:

The challenge of expected results

There is an interesting challenge set by the writing of test scripts, that of expected results.

A model of system usage upon which the construction of a test script is built may not always model the steps which have to be taken in order to check the pass/fail of an expected result.

This suggests that the construction of test scripts is not done through only one model. There is at least one other model available which describes the conditions of the test and how to validate the successful implementation of those conditions.

The challenge to the tester is in the integration of these two models; the condition model, and the system usage model, into a single test script.

There would appear to be no standard usage of test conditions:

No doubt there are other uses of test conditions that I have not been exposed to.

Current testing tools, if they support test conditions at all, tend to model test conditions as a textual description. These textual descriptions are then cross-referenced to test cases in order to determine coverage of the fundamental features of the system analysed from the specification documents. There is no support in the tools to link the conditions to the scripts or script models. There is also no support for the modeling of the steps taken to validate those conditions that require validation i.e. the 2nd usage given above.

The test script construction process is analogous to the inversion, correspondence and structure clash processes presented so long ago by Jackson Structured Programming and more typically the informal mapping from design and specification to program code that developers do on a routine basis.

There are techniques to be learnt from these processes and tool support is required.

In the absence of tool support the software testers must document these models as effectively as possible.

This has the effect of expanding our modeling of test conditions to including instructions on how to validate that those conditions have been satisfied.

There is much that the tester learns from experience, many of these experiences are shared by, and have been documented by, the software development teams already.

Models are important in testing. They form the basis for all aspects of the testing process. It should be appreciated that the models used to derive tests are different from those used to construct test scripts and that in order to construct scripts effectively the overlap and intersection of these models must be identified and controlled.

This is a small section listing recommended reading for some of the development activities discussed in this text.

<< An exploration of, and notes on, model path analysis for Testing
On Modelling >>