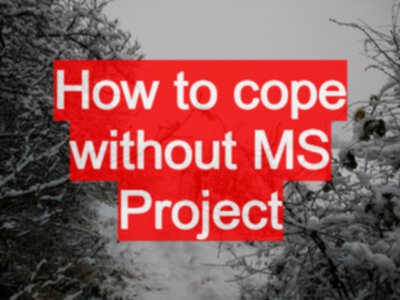 How to cope without MS Project

MS Project is the project schedule tool that I encounter more on site than any other tool, and the one that I personally prefer to use on sites.

But sometimes things don’t go as planned and I recently found myself without MS Project on a site with many MS Project Plans.

Sadly Microsoft do not provide a viewer for MS Project files so I hastily tried to find a tool to help me view the plans.

I looked at a few but none were suitable, and then I found Afinion Project Viewer. The free viewer was adequate for my purpose, but at only 46 USD the full version seems reasonably priced, there is a lite version available for only 16 USD.

The free version allowed me to open .mpp files, and view the project plans in an outline with the associated gantt diagram on the right.

So with Afinion viewer installed I can now comment on the plans.

But I also had to create my own plan and I don’t actually like doing that in a spreadsheet so I needed a free project planning tool that would give me the flexibility of moving back to project later, or of working with the files directly.

I’ve actually been looking for an excuse to try the opensource ganttProject in a production environment. 2 versions are available, both version 1.11.1 and 2.0-pre1 use the same file format.

2.0 looks much better and has a much better GUI, but still has bugs in the GUI that caused some hassles when creating milestones, and didn’t have the full complement of exports that 1.11.1 has, so 1.11.1 should still be the version of choice used in prodution. But 2.0 is more comfortable for viewing your projects and is certainly worth watching to see how much more it improves.
v 1.11.1 has a handy export to mpx to allow me to move back to MS Project and the html export is very effective for sharing plans.
Because xml and xsl are used for the exports you can even plug in your own exports, but I didn’t try that, the defaults served me perfectly well.

Neither tool requires an install and I will add both to my System Tools folder and memory stick. Both run on Java, so with a local JRE installed in the tools folder I can avoid conflicts on any borrowed machine.

In an emergency I will happily turn to these tools again, and for simple plans GanntProject is perfectly adequate.
And the links again:

<< 3 Useful Questions, GS
Can the words that we use affect our thinking >>