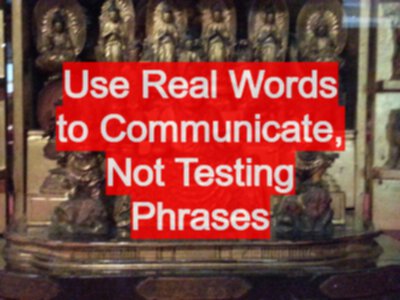 Use Real Words to Communicate, Not Testing Phrases

I think people use ‘standard’ testing phrases too much. e.g.

The user of each phrase holding the assumption that the reader/listener of each phrase understands the phrase the same way as the user. They don’t, they have their own models that underpin that phrase.

One recent example from the world in which I inhabit:

Now we have a label, for the concept. And more importantly we have agreement on what we intend to do.

I used real words to communicate.

You can do this for all aspects of your testing, resulting in contextual communication of your test planning process:

Feel free to inform your planning process, if you must, with concepts such as “performance testing” or “load testing” or insert any other testing phrase here. But do not use them to communicate.

I think that eventually you will wean yourself off those testing concepts and start to work from first principles and communicate in simpler, non-buzzword and less ambiguous terms.

I recommend you try it:

<< Tutorial on Burp Suite Repeater and Intruder
How Can I Estimate My Testing? >>