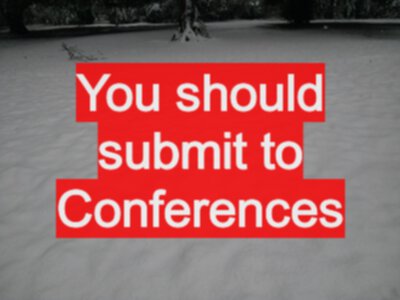 You should submit to Conferences

Last post I said you ‘can’ submit to conferences. Now I say you ‘should’ submit.

For a while I didn’t submit to conferences and I let other people set the agenda for software testing. But sometimes I didn’t fully agree with them, and sometimes I disagreed. And I didn’t see anyone making quite the point I wanted to see made.

Fail: But I didn’t think that I had anything to offer, even though I had a different perspective on things.

Fail: But I still went to conferences listening to people spout things that I thought were nonsense.

Eventually I submitted for conferences.

Fail: But I missed a few conferences because_ _I planned to submit but never actually got around to doing it.

Win: I submitted to some conferences and didn’t get accepted. With each failed submission I generated more energy for getting my point across next time. And so I wrote more blogs, or submitted to another conference.

Win: And when I did get submitted, clearly that was a mark of excellence from the perspective of the conference organiser.

The deadline for Eurostar 2013 submissions ends on 13th February 2013. You should submit now.