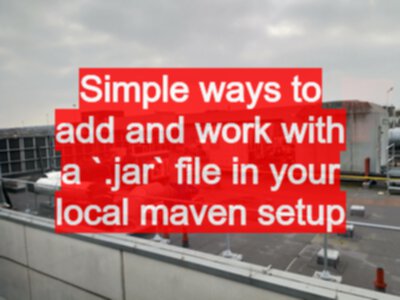 Simple ways to add and work with a `.jar` file in your local maven setup 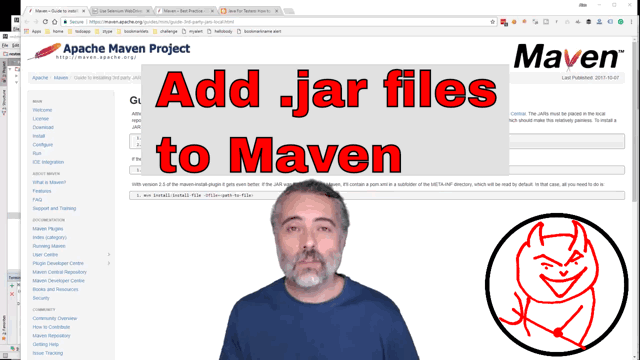 Sometimes you want to work with a jar file that isn’t hosted in maven central.

You have a lot of options for this. The approaches that I have used:

For very quick hacks, add the .jar as an IntelliJ project dependency and bypass maven. 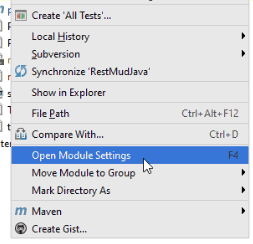 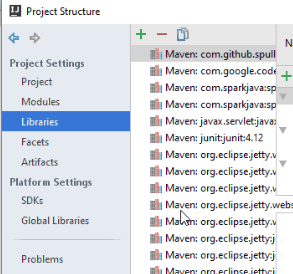 I demonstrate this in my free Java Desktop Application Technical Testing and you can read a blog post containing this information.

This is a very tactical approach:

But it might help you get your immediate work done:

And then adopt one of the following approaches if it works.

As a short term tactic, I have also added the .jar as a system scoped file.

I did this in the past when working with a ‘bug fix’ version of Selenium WebDriver that had not yet propagated through to maven central, but which was available for download.

This can be a useful tactic, but I don’t think it really scales strategically.

To have the .jar available as a dependency that I can bring in using a normal maven include, I can install the .jar locally to my .m2 directory and repository.

I have split my game into multiple projects:

I have not released the game engine to Maven central, but the code is available on github, as is a release .jar file.

I can build a snapshot .jar locally for my current work.

Install it into my .m2 folder

If I didn’t have the pom.xml file, I could still do this, I just add the details from the pom.xml into my command line:

And if I want the source code jar to be associated with the .jar (which I usually do) then I add the following argument to the command line:

This allows me to keep the pom.xmlof my projects which use the .jar to remain as though the .jar was on a repository manager or in maven central.

I think this is a good tactical approach, that supports a longer term strategic development of your development and automated execution approach.

Use a repository management tool

You could install a dependency management tool like nexus or Archiva.

Then your .jar files are installed into this repository which is accessible by your team, and CI process, and not just your local development machine.

You’ll probably want to evaluate which of the repository management tools works best for you and your environment.

This is a much more strategic approach and is good for team work and continuous integration processes.

This is probably the most strategic long term approach, but requires you to make your work public.

All of the other approaches mentioned allow you to keep your work to yourself.

It is quite a long process, so I won’t describe it here, but I have a full write up on my blog.

Install .jar into your local .m2 folder or as System scope

Releasing your Jar to maven central

On DZone, Florien Enner mentioned the approach he likes to use:

My personal favorite is to install the jar into a local folder (e.g. a ’lib’ folder next to ‘src’) that can be added as an external repo in Maven. That way you can just check it into version control and don’t need to setup a full repo or require every computer to install a jar into the m2 repo. You can do that by specifying e.g. -DlocalRepositoryPath="./" See e.g. https://stackoverflow.com/q/3642023