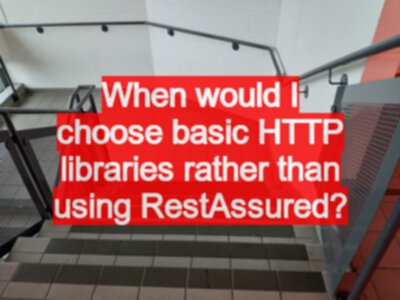 When would I choose basic HTTP libraries rather than using RestAssured?

TLDR: when I have a small set of HTTP use-cases, and I’m working on fast in-build HTTP integration verification then I’ll probably use HttpURLConnection

It isn’t an easy answer since I’ll know it when I see it.

But… since I’ve just implemented a bunch of @Test methods for a test app that I’m writing and they use the HttpURLConnection I will explain my reasoning for that.

Most of my test apps use Spark as their embedded Web Server.

And by easy to start up for testing purposes I mean easy.

Clearly the above is an abstraction layer, and I’ll explain that in a future post, but I can have a single line of code in an @BeforeClass method that will quickly startup my app, listening on a port ready for me to send HTTP requests as local integration tests.

I put these in a separate package to my super fast Unit tests, but these usually run fast enough that I don’t do anything special to separate them out in my build process.

Because my test app is running locally as part of my JUnit execution, I want any @Test methods to run quickly and have minimal maintenance.

I decided to use the built in Java HttpURLConnection rather than an external library.

With RestAssured (or any third party HTTP library), I have to be very conscious of the version I use, and I might find I have to update my project and change my code just to keep the version of Java advancing.

Using HttpURLConnection keeps my life as a programmer simple.

And over the years I’ve build up abstraction code to help me that I move between projects. Cod that I will eventually put into a support library, at some point, probably just when the Java 10 HTTP 2 library is released thereby making my abstraction code instantly redundant.

I think the HTTP2 library is still in []incubator mode](https://dzone.com/articles/an-introduction-to-http2-support-in-java-9) and will probably change for Java 10 so at the moment it feels like a third party library which would add stress into my code, rather than make things easy.

I try to use built in libraries where possible to reduce the size of my project and the amount of stuff I have to learn that might not be transferrable to other work.

The build in HttpURLConnection isn’t perfect but a quick layer of abstraction layer and it works well in situations where you do not require a lot of flexibility and edge case processing. For my testing I will mainly issue some GET, and POST requests, and won’t really do much error processing.

How do you use HttpURLConnection

I will have an @Test that looks a bit like this:

And you can see I’ve hidden HttpURLConnection behind a BasicHttp abstraction, so if I do want to do anything more complicated I can change that abstraction layer to delegate off to a third party library instead of using the HttpUrlConnection. And my @Test code won’t have to change.

So, what’s in the box at isPageAt?

For a simple ping test, HttpURLConnection gives me what I need without any third party libraries and it works fast.

Running on localhost as a simple embedded server means I don’t have any complicated connections.

I do sometimes want to go beyond ping and get the body of the request. And HttpURLConnection does make you work a little harder at this point to get the request body.

Bit of a pain, but having copy and pasted the code from Stackoverflow into your own abstraction layers you never really have to worry about it again.

And so it goes on

HttpURLConnection can handle proxy connections, PUT, POST, custom headers etc. So your abstraction layer for your use case grows to cover what you need it to do.

You only have to write code to cover the situations you test for.

If you find that your abstraction layer is starting to balloon out of control and you are maintaining it more then it is probably time to consider bringing in a third part abstraction like RestAssured to minimise your work load.

I tend to use HttpURLConnection as default instead of a third party library like RestAssured when:

Also note that the @Test methods here are strategic in that they are a long-term automated execution approach. But they are also part of the early ‘build’ process.

When they are part of my ‘integration’ test process I’ll probably use RestAssured as the default choice because I will be expecting a less constrained set of use cases for the HTTP requests and I’ll probably be coding in a different project than the main code project so dependency management will be less of an issue.

You can find the code I’ve referred to here on Github if you want to trawl through the project:

And you can find a slightly bigger set of HttpURLConnection abstractions here at some point I’ll pull these out into their own library.