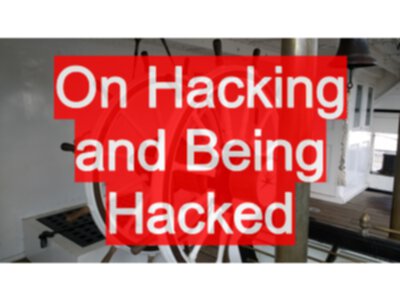 On Hacking and Being Hacked

TLDR; If you self-host a Wordpress site, make sure you can restore from backups and check your site using wpscan and other tools regularly.

Is it irony or synchronicity when you learn hacking in more detail and end up being hacked.

On Monday 15th May 2018 I was working through a hacking challenge on Immersive Labs.

It was based around a WordPress site and the site was up to date with the most recent version of WordPress. I thought I was going to get nowhere, but I experimented with some tools and approaches and with a combination of wpscan, and dirb I managed to:

I was in the middle of trying to access the database when I received an email from my web host informing me that my website SeleniumSimplified.com was offline because of a malicious page.

The hosting company took my site offline so any issues were not visible to me easily. I could not access my site via the IP address or the domain.

At this point I have a decision to make about what to do next:

With each of these there are risks.

I decided to convert the site prior to investigating because it was more important for me to get up and running again, than know why it happened.

I copied all my TesterHQ Selenium Simplified posts into a new Hugo Instance and then copied the HTML for the pages which were not represented in TesterHQ into Turndown to convert to markdown and then created HuGo pages.

I haven’t finished investigating yet. But I do know:

What did the hacker gain?

I have no idea.

I’ll figure out what to do with comments later. I think blog commenting is ‘broken’ generally: too much spam, I don’t particularly like disqus. I’ll need to look into a solution long term my site.

I haven’t added Google Analytics in yet.

I have to amend the site for SEO, and I haven’t double checked all page redirections or internal link redirections yet.

I now see that I have a gap in my tool set for an effective monitoring solution for web applications.

But I also need to tool to monitor all the parts of my setup - much like when we conduct technical testing - checking results just at the GUI, isn’t enough, we need to look in the database, and on the file system, and everywhere else the system touches the technical infrastructure.

With a WordPress site I rarely have to look at the file system. I probably look at it more than most because I used to upload images via FTP into an image folder rather than using the WordPress upload. But I stopped doing that when I moved to TesterHQ because I upload all the images to TesterHQ instead. I had not identified this as a risk to SeleniumSimplified.com when I did this, but clearly this meant that I looked that the blog file system even less than before, and this made me more vulnerable to not detecting the result of file upload exploits.

We need to learn, or know someone who will, attempt to hack ourselves first so we can protect against someone coming later.

Depending on the data you are trying to protect. Keeping things simple and having effective monitoring and recovery strategies. Might be cheaper than a complicated implementation and protection strategy.