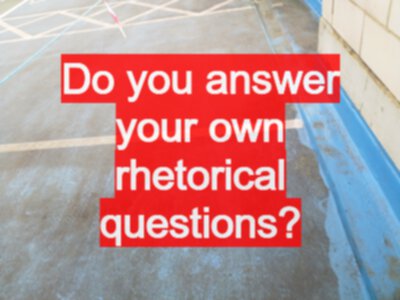 Do you answer your own rhetorical questions?

TLDR: Do you ever ask yourself rhetorical questions? If so, try and answer them by building assumptions. Then investigate your assumptions.

Do you ask yourself rhetorical questions?

I suspect most people do.

Leaving them unanswered means not following up on a opportunity for learning that your brain has put in front of you.

If you find yourself asking a rhetorical question:

Then, you don’t have an answer. Your world view has limits.

Perhaps we could ask a different question…

“Do you ever answer your rhetorical questions?”

What value we can gain by answering our own rhetorical questions?

Rhetorical questions often hint at a world view that we don’t share.

A Weltanschauung with fundamental beliefs that we don’t understand.

A system view which has partitioned the System differently and models different information flows and events.

Answering our rhetorical questions can go some way to modelling another point of view. Not so much that we adopt it, simply so that it feels less alien and that we can interact with it.

When I do answer a rhetorical question, it doesn’t mean that I understand that viewpoint. It means that I have built a set of assumptions that I could use as questions to people who do have that viewpoint. The assumptions we create to answer the question are limited by our worldview and our imagination.

We use assumptions to answer rhetorical questions based on our world view.

How would assumptions help?

This can sometimes help when workplace opinions seem to clash.

“We need to cut the time allocated to Testing by a month.”

Rather than initially attack or defend our world view, which often escalates into conflict and very poor working relations:

We could build a model of that world view

We could build a model of that world view by asking rhetorical questions, seeking answers to those questions, and then asking questions drawn from our model.

Why would someone believe we need to cut the time allocated?

We could ask ourselves, are those beliefs valid?

This helps us have some evidence to support our beliefs when we do engage in a defence of our position.

And our defence could involve describing:

We could extrapolate that into ‘risk’ if we wanted to.

We can ask if that was the anticipated result of cutting the time?

We can ask if this is acceptable? Or do they want to give us more time?

Why would someone think that only testing time can be cut?

We could ask and find out if it is, before challenging the belief.

We might check if they believe that “only testing time can be cut” by asking “what would happen if we cut the time for other activities as well as testing so that everything is cut, but by smaller amounts?”.

And also we don’t really care what they believe, we do want to open options and opportunities and asking questions that trigger thinking, rather than triggering justification often gets better results.

We can challenge our assumptions about their position

What were the ambiguities in their statement? Perhaps they believe we already have a shared understanding of the situation.

If the person saying it doesn’t believe it and is simply parroting someone from above, then no amount of evidence will sway them.

Are they in a power relationship where they lack power so are doing as they are ordered? If you have more power then you can win.

Are they in a fear relationship where they fear the possible actions of those people who ’need to’? If so then you could generate fear that this action will lead to bad things and force them to take that information back - in this way ‘risk’ is often a weapon of choice when communicating the impact of testing. Particularly if you can communicate the possible outcome of the risk as something that triggers fear. (Of course I’m joking. Never do that. Ever. (Unless you have to.))

What other ambiguities are present? “… Testing by a month.”

When we ask rhetorical questions, and then answer them. Our answers are clearly filled with assumptions.

We could try to ask questions to determine if our assumptions are correct and shared in their model of the world.

We do want to avoid questions where we assume that our assumptions are correct and challenge them on that basis:

We use the assumptions to refine our model.

If we find ourselves with rhetorical questions, then we can pursue them to open up new areas of research or interaction with other people.

When we don’t answer rhetorical questions, what do we lose?