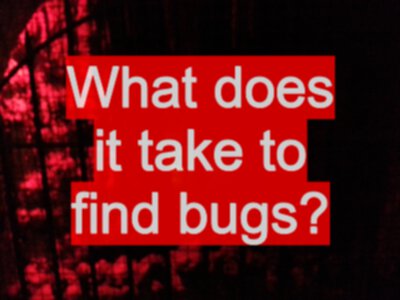 TLDR; Testing uses models to target the system, and our information is constrained by the models we use and build. We can introduce variation to increase the possibility of finding information related to bugs. We have to take care not to develop false confidence.

Some notes on testing inspired by quotes from Ackoff, Ashby, Dijkstra and Weinberg.

“Dijkstra: Testing shows the presence, not the absence of bugs”

Well, we might think “What can we do to show the presence of bugs?”

And… What does “bugs” mean?

Bugs might mean ’this doesn’t always work the way I want it to'.

Problem: Does this work at all?

We have to ‘define’ what “work” means - we could do that through a model of interaction.

We can model the software interaction with an external integration component e.g. a user or another system.

I could model or ‘define’ “work” to mean “given an objective, if I can use the software to achieve the objective then the software works”.

I can identify an objective and ‘use the software’ in the way that I think it will be used to achieve that objective. If I observe that the objective has been achieved then it ‘worked’. But… I can’t say it always ‘works’ because:

If any of those variables change, can I be sure that it continues to work?

I observed a specific instance of ‘worked’ but I can’t take that to mean that it always works.

“…it was right from the start quite obvious that program testing was quite ineffective as a means for raising the confidence level.”

“a discipline of programming” by edsger w. dijkstra

When we test we compare a model of the system with the system.

When I say ‘with the system’ I mean “with our observation of our perception of a reality of the system”.

We can use an ‘Observation’ focus as a key lever to apply to our Testing process to help us improve.

Testing is a modelling process, not a ‘solving’ or ‘proving’ process.

I modelled the interaction at a certain point of time.

My testing resulted in an amended model of the system.

For the paths that I didn’t observe any issues, then I may have reinforced in my model that the perceived probability of failure in this part of the application is reduced. i.e. I didn’t see any problem so I now believe more strongly that it ‘works’.

I might equate that to an increase in confidence.

As a tester I have to maintain skepticism towards the system.

“extreme skepticism is the only proper attitude”

What does it take to show the presence of bugs?

pg 20 “a discipline of programming” by edsger w. dijkstra

Find an instance of data, interaction approach, path through the system. And vary it.

If we keep using the same data, interaction approach and path through the system then we aren’t maximising our opportunity to “show the presence of bugs”. We instead run the risk of falsely increasing ‘confidence’.

“Theories can be tested by using data from the past, present and future - and progressively improved as a result. However, the data used to test a theory should not be the same as those that suggested it.”

“only variety can destroy variety”

We use variation to find a combination of input such that the system does not exhibit enough variety in its processing to provide an output that falls within the tolerance parameters of our oracle.

But we have issues:

One of the key issues for Testing is how much variety is enough?

This is one of the hardest parts of testing. How do we know when to stop?

Some heuristics around this are:

It is easier to identify when should we not stop.

Often we use Automation as a confidence tool.

“If we run the automated execution and it still works then at least we haven’t broken anything.”

If we understand that this means to the limits of:

We could add more variation into the Automation.

‘input data’ seems the simplest variation injection point. Keep the path and interaction method constant, and vary the data. We often have to constrain the variation in input data to the oracle. Which generally means randomly pulling values from a set of equivalence classes or exhaustively using an input set.

Identifying where we constrain the input data, might lead to identifying new paths or gaps in our oracle coverage.

We run the the risk that we missed things out of the sets, or we defined our equivalence classes incorrectly.

This risk exists because we are modelling rather than solving.

The risk is that this takes too long. Therefore we could run the variation execution in parallel to our other automated execution.

We face the risk that we identify a massive scope of variation. Then we need to convince ourselves that we do not need the variation or can identify where the variation will benefit us. By reviewing our existing automated execution coverage against the variation we are going to introduce. But… we have to take care that that future changes do not impact or invalidate our review.

When we have no variation in our automated execution. Then we have created a fixed model of the application, and should remain vigilant and skeptical of its coverage. This skepticism can lead us to review the model more frequently (the automation) and check that it covers enough (of our model of the system). Treat it as a ‘safety net with holes’ rather than ‘confidence booster’.

I can view Testing as a model building and comparison process.

We try to increase the probability that we find information that is of value.

Variation can help with that.

Be careful in using Testing to boost confidence, maintain a healthy skepticism.