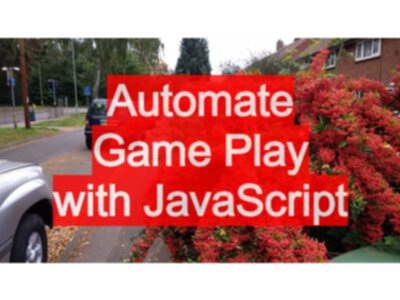 I noticed that Angie Jones had performed a live coding session against an online Tic Tac Toe game.

Initially I skipped through the video to see:

This is something that can be hard to find online. But is one of the major benefits of pairing in teams, because we learn from the different approaches around us.

I created a solution, in JavaScript, in the browser.

In this post I will explain what I did, rather than compare my approach to Angie’s.

I’ll try and do a comparison in a different post. But I think it is worth pointing out that both solutions are “Automating” rather than “Test Automation”. But both, in their current form, can be used to support testing in different ways. And both offer a basis for refactoring into something which would be counted as Test Automation.

The video below shows the development of a small bot to play the game from within the console.

The steps to creating the bot were:

If you want to jump ahead and try the bot then the code is below, and published as a gist:

The basic recon is to use the dev tools to investigate the game.

And by using the DOM view I can see that all the information I need to play the game is in the DOM itself.

I can create CSS selectors to identify all of these

I need to identify quickly if I can actually automate the game.

So the main things are:

Restarting the game is pretty simple:

I can issue a click event to the restart div.

But I also need to check if it is displayed. And I can use the display style value to do that:

I want to be able to click on empty cells.

I can find the empty cells using a bit of CSS locator magic involving the ’not’ pseudo-class.

I tried to .click on a cell but that did not add a value.

Investigating the events on the DOM showed that I needed to trigger a mousedown event.

I can trigger a mouse down event on a cell:

But I really need to do this from the child cell which has the X, or O, because I only want to dlick on empty cells.

I could either do this from the ‘child div’ by sending the event to the parent.

Or I could click on the child div, and have the events ‘bubble up’ to the parent.

To build the bot, I like to start simple and expand.

I can create a simple bot that adds value by having it reset the game for me automatically so I don’t have to click to start a new game.

setInterval creates a ’thread’ which executes the resetGame function every 500 milliseconds.

And this resetGame checks if the restart div is shown, and if it is, then clicks on it to restart the game.

I capture the ’thread’ in a variable so that I can stop it with a clearInterval command if I want to. Otherwise it will keep running until the page is refreshed.

Next I write the bot.

The bot is a simple state machine that says:

The ‘find all empty squares, randomly click on one’ code is:

Then I add that as the second state in the bot:

This automates the game well.

This plays the game poorly since there is no strategy behind selecting cells.

It would take a little work to add a strategy in here to select the ‘best’ next square, rather than a ‘random’ square.

But this might help flush out any memory errors, or if there are any changes in rules for later levels.

Because it is ‘automating’ rather than ‘playing’ we would need a person to observe and interrogate it. So this would be an augmentation to a test approach, rather than implementing the assertion of specific conditions.

Now that you’ve seen my implementation, compare it with Angie’s so that you can understand the different design decisions we each made and see the implementation in different languages and tooling.

If you don’t know programming well then: