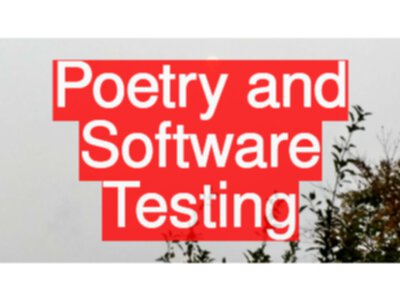 TLDR; Do you test with individuality? Do you release work that reveals and harnesses your creativity? You can. Take heart from people like Stafford Beer, Charles Dodgson, Buckminster Fuller, William Blake and more. “I will not Reason & Compare: my business is to Create”

When I look back through my blog posts and presentations I can see that I quote from poetry… a lot.

I’ve just published a book of Rhyming Verse, or Poems. And thought that would be a good excuse to look at some of the people I have quoted from, and found value in, over my career - particularly those that wrote Poetry, but were not always seen as poets.

I must Create a System, or be enslav’d by another Mans
I will not Reason & Compare: my business is to Create

These two lines always remind me to create my own model of the disciplines that I study.

Each of us have a unique perspective and a unique set of influences.

When we combine our influences, perspectives, experiences as we communicate in a different domain then each of us are able to explore nuances that other people can’t.

It allows us to create our own unique viewpoint on that discipline.

If we don’t do this then the only model we have is “another man’s”.

But worse that that, we only have the model of “another man’s” that they were able to communicate to us, or we were able to understand. Our model won’t have ’their’ nuances and will be all the poorer for it.

When we test, we have to reason and compare, that is our business.

We are expanding our model of the system under test, we are not trying to create a new system.

But when we model “Testing” itself… that’s when we don’t reason and compare. That’s when we create our own model of the system.

Two (at least) models of something have clashed. Then people reason and compare them. They try to ’explain’ to the other their understanding of the model.

When we reason and compare we are being sucked into ’their’ model of the world. Because we are reasoning about their system and comparing our understanding to someone else’s.

But what if we just let the other person have their model? What if we take from it what we find useful, and build on it, expand it, mutate it, twist it, rename it, and make it our own.

What happens if our business was to create a new and unique model of Testing for ourselves that we build from our own experience and understanding, incorporating what we learn from other people and moving forward?

“One, two! One, two! And through and through
The vorpal blade went snicker-snack!
He left it dead, and with its head
He went galumphing back. "

Lewis Carroll didn’t seem to let the lack of an existing word limit his expression.

Jabberwocky was included in “Through the Looking Glass” from 1871.

It seems to have made its way into everyday usage as Galumph to describe how pets, especially dogs, run when playing. A common quote using it is from Stephen Nachmanovitch’s book “Free Play” with a definition of:

“Galumphing is the immaculately rambunctious and seemingly inexhaustible play-energy apparent in puppies, kittens, children, baby baboons - and also in young communities and civilizations. Galumphing is the seemingly useless elaboration and ornamentation of activity. It is profligate, excessive, exaggerated, uneconomical… In the higher animals and in people, it is of supreme evolutionary value.”

James Bach uses this definition in this talk video.

I like that Lewis Carroll did not define it, and as Alice said:

‘It seems very pretty,’ she said when she had finished it, ‘but it’s rather hard to understand!’ (You see she didn’t like to confess, ever to herself, that she couldn’t make it out at all.) ‘Somehow it seems to fill my head with ideas—only I don’t exactly know what they are! However, somebody killed something: that’s clear, at any rate—’

Through the Looking Glass, Chapter 1

When we find these words in poetry we get to own the model of their meaning to us at a particular time.

What might Galumphing mean when read as a new compound or portmanteau word distilled for poetic effect?

All of the above? After all it may have been a long journey away from home, he may have had time to indulge in all of those meanings and more:

He took his vorpal sword in hand;
Long time the manxome foe he sought—
So rested he by the Tumtum tree
And stood awhile in thought.

One of the many skills we have to develop as testers is the mastery of ambiguity:

We may have to model the ambiguity to explore it through questioning or subject it to tests.

Alice, and Jabberwocky are among Lewis Carroll’s most famous work.

In Sylvia and Bruno Concluded Lewis Carroll throws in an exploration of modelling.

… And then came the grandest idea of all! We actually made a map of the country, on the scale of a mile to the mile!”

“Have you used it much?” I enquired.

“It has never been spread out, yet,” said Mein Herr: “the farmers objected: they said it would cover the whole country, and shut out the sunlight! So we now use the country itself, as its own map, and I assure you it does nearly as well.”

But Lewis Carroll was also Charles Dodgson and worked as a Mathematician. Modelling and Logic were his essential skills.

Modelling is an essential skill for Software Testing.

Not just Modelling for ourselves, but finding out the best way we know how to communicate as effectively and distilled as possible for non-testers, in words that they can understand.

Buckminster Fuller does not seem to be classed as a poet, but his work is filled with Poetry. Particularly “Intuition” which manages to collect a huge amount of negative reviews as being ‘unreadable’ but… I find a lot of value in it.

Man can invent,
Which means “bring in,”
The special-case use
Of generalized principles
And of combinations of them.
But man cannot design
Or invent
A generalized anything.

The Poetry format encourages more ‘reading into’ than expecting the meaning to be presented on a plate. And this also makes it more suited for randomly dipping into to for serendipitous discovery.

Buckminster Fuller never let language hold him back. If there was a concept he wanted to explore and could not find an appropriate word, he made it up, and he made it stick. Hence the Dymaxion Map (among other things).

Stafford Beer was a Cybernetician who applied Cybernetics to management and organisational design.

His book “Platform for Change” in particular is presented as a Technical work of Art, mixing diagrams, poetry, prose, different coloured pages for different concepts (although I think you’ll have to track down an earlier edition to experience that facet of the work).

The trouble is that
I don’t know
how the world should be run.

All I can do
is to share an experience.

All I can say is
this is how it was.

What I particularly like about Stafford Beer is the description of the application of Cybernetics, many hand drawn diagrams and his formal prose is filled with informality.

I can’t recommend the writing of Stafford Beer highly enough.

When testing, communicating our testing, thinking about how to test.

The temptation will be to conform. To use templates and standards.

To use tools that enforce a particular set of fields.

But to fully harness our capabilities of exploring the System.

We have to be free to model as we see fit.

Be that with mind maps, or outlines, or diagrams, or whatever.

I added ’technical’ writers like Buckminster Fuller and Stafford Beer into this list to show some precedent for this. But you can find many more e.g Richard Feynman and A sonnet to Science covers Ada Lovelace, James Clerk Maxwell, Humphry Davy and more.

I mentioned many of the people here in “Dear Evil Tester”, a book that I used Q&A, Cartoons, Poems, and informal essays to try and generate an ‘attitude’ of Testing in the reader. And I listed many of the people and subjects that I’ve studied in order to develop my attitude.

I don’t write serious ‘poems’ I write Rhyming Verse, which makes it suitable for all ages. I appreciate that not everyone appreciates seeing poems in ‘serious’ testing books and blog posts. But I take courage from exemplars who followed that path before, and disapproval didn’t stop anyone in the list above.

Yes, I wrote this post to promote my book There Are Hats.

Also to act as some encouragement to anyone that might feel hesitant about making public their creative material in case it receives disapproving glances from your professional sphere.

The people listed, and dotted throughout my presentations and blog posts inspired and helped me change the way I test software. They also helped me see that I could present it with more individuality.

If you look through the books by scientists or philosophers or psychologists or musicians or ‘whatever’ on your book case, I’m sure you’ll see examples of sketches, and poems, and whimsical diversions.

There Are Hats - A Book of Rhyming Verse 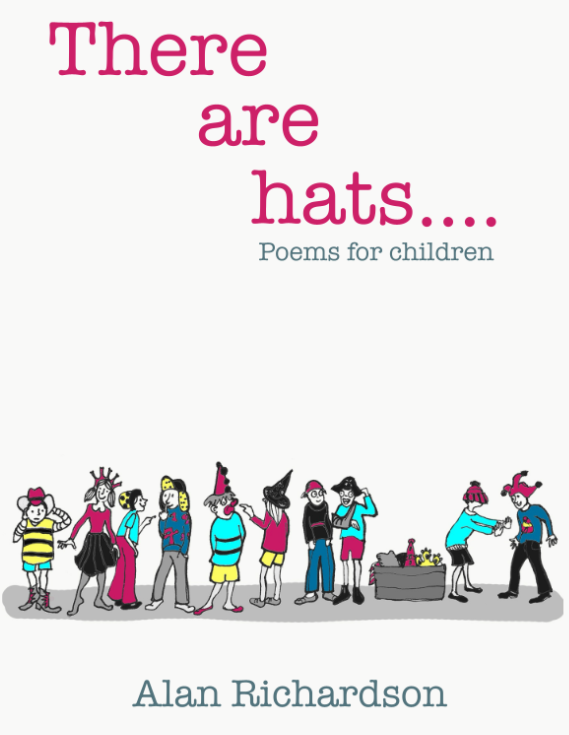 << January 2021 EvilTester.com and Patreon Content Summary
Can we use JUnit and TDD for Testing? >>