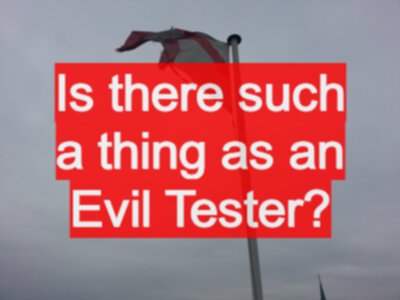 Is there such a thing as an Evil Tester?

Q: Is there such a thing as an evil tester or isn’t anyone who’s poking holes in a product and helping you find the problems? Good?

So part of the reason I picked the word evil is that it is so broad as to not actually mean anything, nothing specific.

One person can categorize an action is Evil.

And another person, the same action is Good.

There probably isn’t such thing as an Evil Tester, except I created a cartoon character who was a trickster chaotic character working as a tester on a project.

And that’s the only thing I could class as Evil Tester because it was designed to be an Evil Tester.

I have seen testers do things which I could class as evil, in the sense that they were damaging or harmful or detrimental.

And I considerd their actions as wrong.

Like spending months writing test plans, upfront, filled with test cases, more than could be executed in the time given for testing, in too much detail for anyone to review, and demand that users and clients review them fully and putting the responsibility on the reviewer if things go wrong because they can say, we told you we were going to do and you were supposed to stop us.

All those concepts of:

I view as immoral, but the people doing it were not evil.

But the people who created the process probably were not evil. They were “Following best practice”.

It’s subjective, Evil is too broad a word.

Now I use it, primarily, to inspire myself:

All those Alternatives, and given the Question, I could categorize someone poking holes as evil for some people on some projects.

“Poking, holes is evil. Why are you finding so many bugs? We’re trying to release the product! Stop raising defects! Stop trying to stop us!”

Some people view that aspect as not helpful to the project. Whereas on some projects it’s very helpful.

Evil is a point of view.

The way I think of it is to take inspiration from the word evil and apply the inspiration to my actions on the software under test.

I think that’s easy to justify and helps me find new ideas.

The earlier examples I gave were applied to a project. They were actions applying to the project and to the people on the project.

The thing I bear in mind is that everyone: in films, every evil character in films, or people in politics or daily life that does something that parts of society class is evil.

“They” think of themselves as doing good.

So we have to be careful and make sure that we constantly review our own beliefs and assumptions behind our actions.

This was originally recorded on Racket in 202107

“Evil Tester” is an attitude. An attitude I try to develop and explore in Dear Evil Tester

<< Why Speak at conferences? write blogs? - To get your message out.
How far should you go in your investigation of a defect? >>