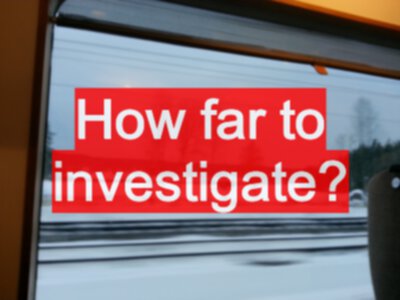 How far to investigate?

TLDR; Go as far as you can, while you are still adding value to the person who is following.

How Far To Go?

So when you find a defect, how far should you go in your investigation?

It varies depending on the application and the team you working with. So the general answer is… as far as you can while your investigation is still adding value.

You need to go at least as far as to confirm that it is a problem, to identify the reasons why this is a problem.

What Oracle does it violate?

If that is within your control… be aware of the limits of your control. If you have to request permission to access some new system, so that you can then do an investigation, then it might be important, but it’s a step too far at the moment.

Should you fix it?

One of the questions people always have is “should you ever go so far as to write the solution?”

“Should you ever go so far as to fix it?”

And the answer is… well maybe, possibly:

You should probably go as far as you need to provide the information that the next person needs to do their job.

As a simple example.

If you find a broken link on the site, do you:

Or you go as far through B as you can.

You do the investigation to find the information to help the next person.

We follow the 80/20 rule as much as we can, 80% of the value comes from 20% of the effort. If you are having to expand more effort in the investigation process, than someone else would in the fixing process, then you’re going too far.

If your investigation process starts bypassing the fixing process, then you went too far.

If people have to ask a lot of questions about the defects raised in order to fix them then, you have not gone far enough.

Go as far as you can, while you are still adding value to the person who is following.

In other words, go as far as you can, to make it easy for the next person.

And sometimes that next person is you.

This was originally recorded on Racket in 202107

<< Is there such a thing as an Evil Tester? Poking holes is good.
February 2022 EvilTester.com and Patreon Content Summary >>