This is the supporting page for a talk that I first gave at the North London British Computer Society in March 2005. I wanted to explore what I thought about Context Driven, how context driven I am, and what I think it means to be context driven. 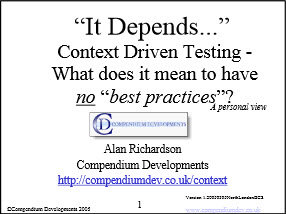 A presentation of my interpretation of context driven testing, particularly to non-testers and what they can expect from their testers when the testers become context driven.

Some basic ’things’ which have come out of preparing this paper, for me, are summarised below and are hopefully clearer in the pdfs.

I’m making statements that practices are generally not well defined enough to communicate to each other without ambiguity (we often just use the names of practises “unit testing”, “end to end testing” and assume the other person knows what we are talking about). This alone makes the use of ‘just a name’ inappropriate for consideration of the practise as a ‘best practice’.

Sometimes ’testing’ make life hard for themselves by imposing a process on a development approach that simply isn’t up to it (i.e. a ‘structured’ approach in a non-structured development situation) and ’testing’ then has to do a lot of rework and maintenance. I make that statement to, hopefully, open up testers to the notion of context driven, if they were not before.

I’m trying to explain that there is a difference between context-aware or context-based, and context-driven. I think that context driven involves coming in with no baggage of approach (but lots of tools and skills), and basing whatever we do on the context as we identify it. Context aware is about knowing something is not right but not really doing anything about it. And context based is about selling in something in a tweaked form.

How other members of the development process can help context-driven testers, and to help make the process more context-driven. By stating ’needs’, not ‘wants’. By being more context driven themselves (even being context-aware would help).

I’m recommending General Semantics and NLP as study areas - since that is what I am most familiar with and use most (I think) for exploring context. I mention other studies that I have seen mentioned here.

Books that have proven useful for this talk were: