In this podcast we consider the question Why? Why? Because we could ask something more effective instead. 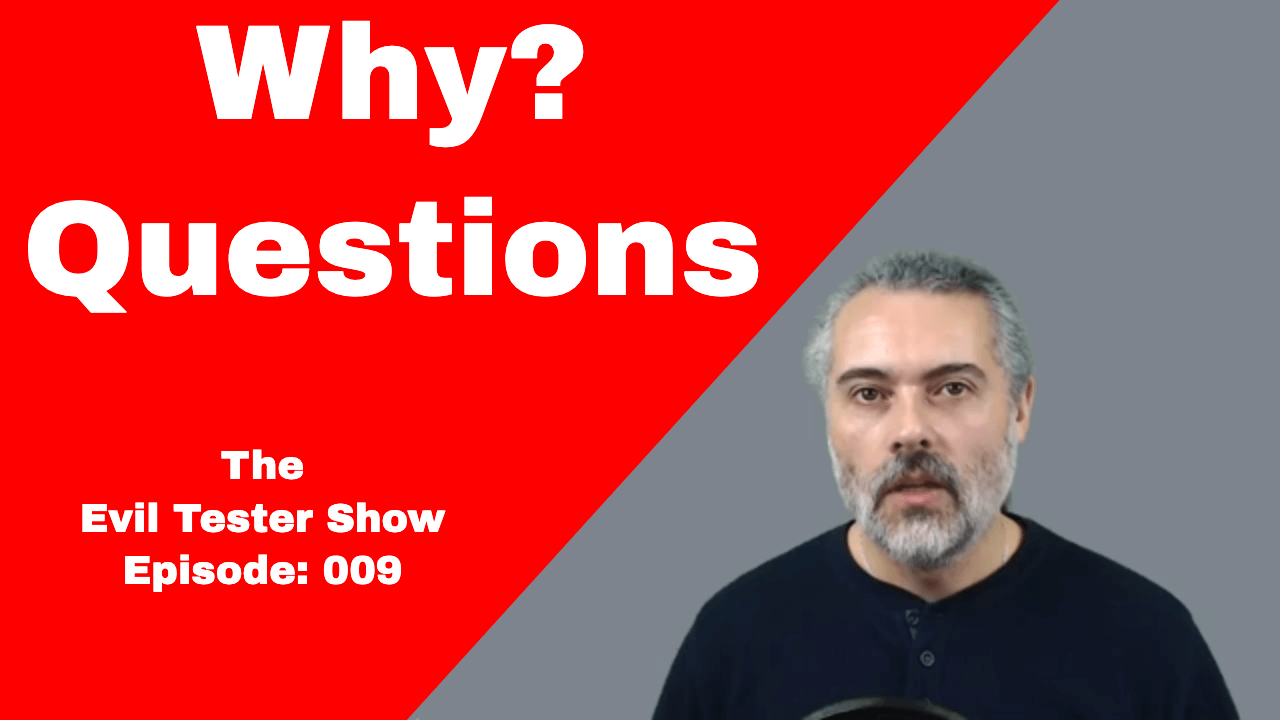 “Why?” is an incredibly popular question.

I think it has problems. I try to avoid it when I’m consulting.

In this show we will examine “Why?” and under what circumstances I do use it.

“Why?” is almost a default question because it can take the place of every other question. It is easy to ask. We don’t even need to know what answer we want. It’s also a very ambiguous question, and when we ask why there is a risk that people try to read into our motivation, and that people might take offence.

When I’m working with clients and I come in for a week, I have a short period of time to build a model of the system of development, the interactions, the reasons, the issues, etc.

I don’t usually do that because:

If I want to long consultancy engagement that build dependency on me as a consultant then Why? could be a great question because I can chain whys and get a really long discussion and lost of vague concepts to follow up.

When I consult I want actionable insights, next steps, obvious alternatives, evidence.

If you want software testing or development consultancy then check out EvilTester.com/consultancy

As children it is almost a default question, it is easy to ask, we get answers, and its fun to see people get frustrated when we keep asking it.

In IT, Management, Engineering we often taught that it is a good question - the Five Whys Technique.

It’s a default. The reason I say that is because I’ve been working hard on my own problem solving processes to avoid it being a default but when I’m not keeping a tight rein on my thinking, it pops up.

But when we ask “Why?” we don’t know what question people will actually answer. It is quite a vague question.

Anytime we ask why, we do no know how people will interpret it. Will they interpret it as a What? How? Where? When? Who?

Or will the interpret it as:

This is very focused on a specific problem. With evidence based answers at each step.

In software or consultancy…

Five whys could easily be rephrased as the “What caused this?” chain to five levels of direct relationships.

“What do we believe is the reason for writing test scripts in this process?”

Is there is risk in chaining beliefs?

Sometimes beliefs aren’t based on evidence.

Humans are very good at having and maintaining beliefs despite evidence.

People are also very good at defending their beliefs.

If we keep asking why then people might go into defensive mode which impacts our ability to work with them.

And when I’m consulting I can’t afford the time that that resistance creates.

Easier to avoid it in the first place.

Why is a very good question for working with people’s beliefs. And if you are trying to effect change in an organisation you will probably have to clarify those beliefs and work with them on an individual basis.

If we ask “Why” and someone doesn’t know. We risk asking them to “make something up” to avoid saying they don’t know.

That then becomes a belief.

And we put them in the position where they have to continue to justify that statement that they just made up.

Why are you asking?

Without a proper context to questions people may read motivations into the question.

“Why?” can trigger a lot of negative motivation.

“How””, “When?” etc. are more neutral and trigger less resistance.

But do you know why you are asking?

We have to have more conscious direction over our questions if we are problem solving or building specific models.

If we are building a model from nothing, and all information that comes back is valid then it doesn’t really matter what we receive in response then it might be a valid default.

But at some point we have to decide what information we want to receive in the answer. And if we create questions that target that answer they probably won’t be “Why?” questions.

What is Why? useful for?

Usually about the person your asking, rather than the thing you are asking about.

But try it for yourself

and I’ll leave you with a couple of quotes.

“The why questions produce only pat answers, defensiveness, rationalizations, excuses and the delusion that an event can be explained by a single cause. They why does not discriminate purpose, origin, or background. Under the mask of inquiry it has contributed perhaps more to human confusion than any other single word”

“join the group of worrying grandmothers who attack their prey with such pointless questions as ‘Why did you catch that cold?’ and ‘why have you been so naughty?'”

If you want a quote for test consultancy contact me via eviltester.com/consultancy

And if you found value in this or any of my podcasts, do let people know or like this on itunes or youtube or wherever you found it.

Proactively tell people about good stuff rather than have them ask you “why are you listening to that?”