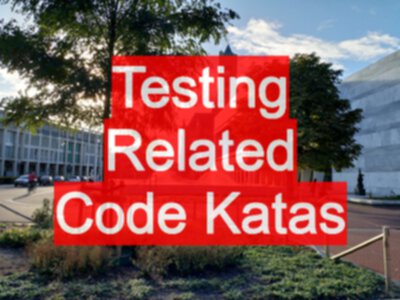 What would be suitable Code Katas for people wanting to learn how to code to support their testing?

Code Katas are a pretty popular concept for programming:

I don’t do Code Katas. John Somnez writes about why he doesn’t do code katas here and here is another take on Code Katas from Micah Martin

Why I don’t do Code Katas

But I realised recently that I might well do Code Katas, but I haven’t called them that.

I have written CounterString implementations in:

I have approached the writing of CounterString differently each time I created a new implementation.

And I have revisited my implementation as I learned more about the programming language.

If you want to use CounterStrings as a way to practice your programming, and potentially consider it a Code Kata.

Here are my suggestions.

With each of these you will create something useful, that supports you in your work. And you’ll learn something.

Other code that I seem to keep writing:

All of these can vary in complexity but provide useful learning tools. You’ll find examples of all of the above in my Github repos (but you might have to search a bit).

How do you practice your programming and what exercises do you use to learn new languages?

<< February 2019 EvilTester.com and Patreon Content Summary
What is Software Testing And Why Do We Test Software? >>