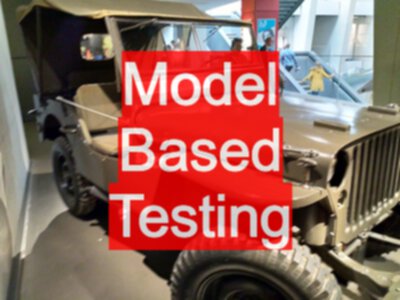 So rather than learn lots of techniques, you learn a couple of models and then figure out what techniques can apply. And even if you don’t know any techniques, the model itself will help you test.

People face the issue that they’re trying to work out what techniques are appropriate when that is the wrong place to start.

Work out what models are appropriate for your situation, then they can become input models to techniques.

And one of the secrets is that most of the models are graph models. Circles and lines, flows.

Pretty much every white box technique listed is actually a graph model based technique. They’re not source code based, they are graph based. But the input to the creation of that graph model was source code.

The graph is the key to the technique, not the source code.

I looked on Wikipedia at Blackbox Software Testing Techniques and then have a look at Boundary Value Analysis and the example on the Wikipedia page was illustrated with a source code snippet because it’s black box.

They’re not white or Gray or Black. Techniques are fed an input model.

Most people don’t even think of the input model as a separate thing, but the modeling activity may well be the most important activity. The application of the technique is basically just a coverage technique.

Techniques are a formal way of attaining coverage, or a coverage list, from some input model. And input models can be generated from different sources.

Once you learn that, software techniques become a lot easier to understand.

<< Tester Role vs Testing Process. Anyone can Test. Are we testing well?
A beginner's guide to software testing - Claims, and Expectations. >>