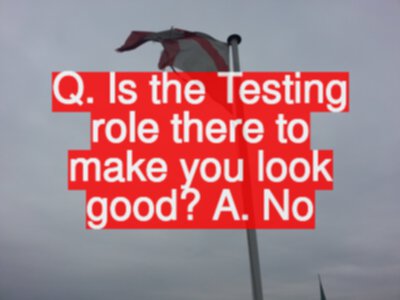 Q. Is the Testing role there to make you look good? A. No

TLDR; Testing does not make things look good, it makes things look the way they are. At which point we can improve, and then look better.

Testing does not make you look good

… unless you already are good!

There’s a phrase I have never used to describe my work, or when I am joining a team, and that is “I am here to make you look good”.

I mean I have seen online people saying “testers are here to make you look good”, “Testing is here make developers look good.”

I am not sure that’s the case.

I mean I’m here to make you look the way you are.

I am here to make you see a truth and sometimes, in the words of Warren Zevon, “it ain’t that pretty at all”.

Our job is to face reality and what we then do is we prioritize the screaming to fix the processes.

I used to think that advertising was there to make things look good but it isn’t.

Advertising ,is there to make things look their best in a truthful way because advertising is regulated, ads get blocked if they’re promoting things that are untrue or too hyped, or make false claims.

And then I thought well maybe it’s marketing. Marketing is there to make things look good to the right people, we don’t want to put our stuff out in front of everybody.

We want to filter it and that sometimes means telling things that are true because it will put some people off but they’re never going to buy us anyway.

Now maybe its sales. Maybe sales are there to make people look good. But it isn’t because they need to get a commission, and they only get paid the commission after the sales sticks.

So it isn’t any of those things.

So maybe what people say …

Maybe it just means helping people understand what you’re doing Well, so that they can see the progress and improvements that you’re making.

I am not sure.

Politicians because they want your vote. And once they’re in for another four years, and they don’t really care.

Or spin Merchants whose job is to make you accept their message, regardless of the benefit it has to you, or the usefulness.

Or Con men who simply want to take advantage of you.

Some people might take this to mean that I’m there to make you look bad. But I’m not. Good, Bad, Evil, Saintly are not appropriate words.

We want to face reality:

What we want to know is what works. And we can’t gloss over that.

I’ve been on the receiving end of statements like:

And the answer is usually a bemused look because the statements are incomprehensible.

I would understand them if I was told:

And the reality is, I’m not stopping them from going live. They want an excuse to ignore the reality of the situation and I’m not prepared to do that.