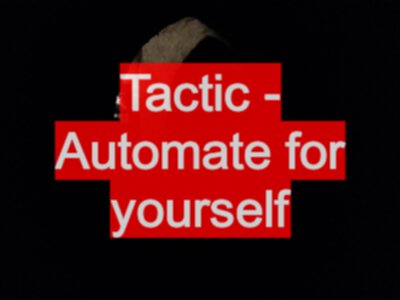 Tactic - Automate for yourself

Sometimes when people automate to support their testing process they shoot for the moon too fast. I’ve done that. And failed. I get lots of emails from people who are trying to implement a Strategic solution, in a tactical environment. And don’t realise it.

I see people who have not yet developed the skills and experience to build the “Test Automation” solution they have in mind. With the risk that they then fall back on concepts like “flaky tests”, or “tech debt” or “Test Automation doesn’t work” or “Never Automate through the GUI” to explain away the over-reach.

Automating Strategically is hard. In fact any kind of strategic operation is hard.

This is why Agile projects try to work in small iterations to help spot issues early and take corrective action quickly.

This is why Agile thought leadership stresses working as a whole team, to avoid over reliance on a subset of the skills and experience on the project.

Sometimes we need to work tactically and learn, before we move forward.

That often isn’t the working practice people want to follow.

When we aim too high, too fast, we often are not demonstrating the value we think we are, we often communicate the work we are doing as ’the end goal’ rather than ‘a learning process’. We are often working slower and making more mistakes than we ultimately will after we gain experience. The perception of the ’end goal’ value is reduced because are are still working towards it, but haven’t described it as a work in progress.

Aim high, but work within our capabilities and develop slowly. Sometimes there is more value in expanding the data coverage rather than functional scope. Make automated execution work robustly on a small scale first, then build on a solid foundation.

What follows is a series of small notes and ideas which have helped me in the past.

If you want to automate, then start tactical, small and simple

“If you want to automate, then start tactical, small and simple.”

I presented at SauceCon 2020 on Tactical vs Strategic mindset in terms of Test Automation. A distinction that I use to help me deal with organisation issues and Software Development problems.

I also use it when thinking about advice to offer.

For example, I receive a lot of emails and questions from testers who are:

Often, when you try to implement a Strategic Test Automation approach like the ‘best in class’ that you see in blog posts and articles before your team is ready. Possibly before your project, organisation, department, or even you yourself, is ready. Then you will hit resistance and will likely fail or struggle because the wider system will not commit the resources you need to succeed.

When you see value in automating then start personal

If you, see value in automating. And you can see how to add value to your personal test process, then start there. Start tactically. Aim smaller. Automate to help you save time and augment your testing.

If the small experiments and implementations that you create do actually add value, and do actually save you time. Then you can spend the time saved expanding the scope, or demonstrating the benefit to other people as part of your ‘sales’ process for more strategic automating.

This doesn’t mean ‘give up all hope of automating strategically’. It means start small with the resources and knowledge you have to hand. This might mean - “use a tool” initially, rather than “write an automation framework”.

“Don’t aim for Strategic ‘big’ automated execution as a first step. Instead, start small, with simple tactical implementations that can benefit you as an individual. And then build from those small steps.”

Not the real problem

There are a lot of reasons for all of this. Many of them are contextual.

“Test Automation” is a big picture concept. Doing something small to improve is pragmatic and hard to argue against, particularly when people can see an improvement.

There is something you can try, regardless of any context.

Look for tools that offer quick wins out of the box with minimal configuration.

If you can program then write quick and dirty utilities that increase the data coverage, and increase the possibility of hitting an edge case.

Automate for yourself so that whatever you do adds value to you.

Automate to support your testing effort.

Identify quick wins for your own Personal Test Process.

Whatever “Test Automation” you put in place.

When starting out, the first customer and stakeholder is you.

The first person to receive value, is you.

You have no budget to spend, except your time. If you spend time automating, then it is time away from the project and you will have to make that time up somehow. So any ROI has to be a return on your time.

e.g. If you spend an hour automating then you need to return at least an hour of your time to break even.

Any waste, is going to come out of your time budget i.e. you may have to work over lunch, or stay late, because you are spending your time.

It is hard. You’re taking a risk.

So start small with simple tooling, and simple scripts. If these do save you time, then its time you can reinvest in automating more, or testing more.

How do you avoid spending your own time?

Get permission for your experiment or learning. This can often be hard when you don’t know what you are about to do, or how long it will take, or what you think the results will be.

Some environments will not support this.

It can be hard.

Sometimes the sales process can be as time-consuming as the experiment.

How to Automate for Yourself

How can you automate for yourself?

If the tool causes re-work, or is intermittent in its execution then stop using it, because it is costing time, rather than saving it.

Automate Contextually. Where you are the context.

It is tempting to automate with code, and with a library like Selenium WebDriver.

I do that. I trained people to do that. But it takes time to learn, and build your experience. Ultimately it is a long term strategic set of learning that allows you to handle more variety.

When you are starting out, and spending your limited time budget. You need to achieve results fast.

Automate simply and at the level of your ability. You are a major part of the context when you are automating for yourself and your time is the only budget that you have.

Automate so that you achieve value as quickly as possible.

When you start by spending your own time, to automate your own process. You are not attempting to automate for the long term and create a large framework or suite of tests that will run in continuous integration.

You are attempting to automate simple paths, that can add maximum value, as fast as you can.

If you find that the tests execute intermittently, i.e. sometimes they work, sometimes they don’t. Then this is failure demand. This is costing you time. This is not adding value.

Quickly identify an alternative approach, or quickly find a solution.

Do not build on something that is intermittent.

If any of the tactics that you adopt work, then you can build on them, and perhaps they can become part of your strategic approach.

Strategic is the Sell

Because you have had success on a tactical basis. You have:

Unfortunately, many people do not work in teams that are operating effectively.

When a project is not operating effectively. Trying to automate ‘well’ and ‘properly’, using Strategic approaches, is likely to fail, and meet heavy resistance.

Unfortunately, and this is not advice that is often given, sometimes we have to look out for our own survival.

I know you want to do the best for the project and put in a world-class Test Automation system.

But… the project isn’t ready for it. So whatever you do, it has to add an advantage to your process, before you try and sell it to anyone else.

They were a lot of work. There was a lot of pain and frustration involved. The cost on our own personal time budgets probably wasn’t worth it.

We learned a lot. But we could have learned the same, with less pain. By spending our personal time on training and personal automation projects.

Strategic approaches to Automated Execution, which are mostly how we talk about automating, require buy in from:

If you don’t have that commitment. Then start small on a tactical personal level first.

One of the hardest things about automating is that we often over-reach our capabilities as we are learning, as we are trying to demonstrate value to people who don’t believe in what we are doing. If we are still learning, then people have to buy in to ’learning more’ as one of the value outputs from the automating, not just the automated execution.