Much of the automating we do to support testing involves detecting change. Once our tests pass, they fail when the system changes and the automated execution alerts us to the change. There are other ways that automating can help us. 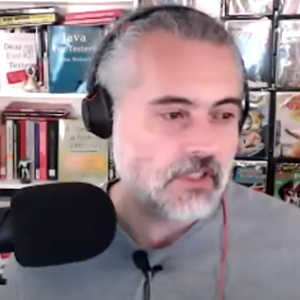 I spoke at the Online BrowserStack Breakpoint conference.

Much of the automating we do to support testing involves detecting change. Once our tests pass, they fail when the system changes and the automated execution alerts us to the change. There are other ways that automating can help us.

The Evil Tester Talks release also has a full transcript for both live, Q&A and and practice sessions.

Automation isn’t just to enable testing—it can also be wielded to support testing. Much of this involves detecting change. Once tests pass, they fail when the system changes, but we can automate the change detection work. We can also automate tactically to achieve quicker results. And if we write abstraction layers well, we can reuse them to create ad-hoc tools or ad-hoc scenario execution. Alan Richardson will talk about the other ways in which automation can help us, using case studies and his own experience.

Much of the automating we do to support testing involves detecting change. Once our tests pass, they fail when the system changes and the automated execution alerts us to the change. There are other ways that automating can help us. We can automate to augment and support our testing, as well as automating away some of the regular change detection work. We can automate such that tools observe the system or traffic as we test, and alert us to conditions we might need to be aware of. We can automate the system when it is unstable to alert us to the fact that it might now be stable enough to spend time testing. We can automate tactically to quickly achieve results. And if we write abstraction layers well, we can reuse them to support us creating ad-hoc tools or ad-hoc scenario execution. This talk is going to focus on some of ’the other ways’ automating can help us, and using some case studies, the topics and skills I had to learn to use them.

There are four main case studies I will explore in more detail in the talk.

This talk uses code examples from:

I was asked some questions prior to the talk.

An edited form of these were uploaded to the browser stack blog.

But it also means. Think the things that no-one else is thinking. Projects tend to have a lot of people on them, and that can lead to group think. We need to have a balance that causes people to stop, revisit their assumptions, and challenge the norm.

There are plenty of experts that will tell you that you “must” do certain things, and that you “can’t” do some other things. Think differently. Do whatever it takes in your environment to make a difference.

That’s what I mean by “Evil Tester”.

2. Can you tell us about the books you’ve authored?

There are three ‘current’ books: Java For Testers, Automating and Testing a REST API and Dear Evil Tester.

And the are all based on experience and trying to fill gaps in the market. I wrote Java For Testers because Testers tend to use Java differently. We don’t tend to create apps, we tend to create tests, and use a lot of libraries. So Java For Testers, teaches the basic Java needed with everything written Test First and covering libraries separate from core Java. Because once we know the basics of Java, everything else is just adding in libraries. To often people learn ’libraries’ rather than coding. And I saw too many people using ‘main’ methods to drive their automated execution because none of the YouTube videos they had watched used Test Frameworks.

Automating and Testing a REST API was designed to provide an introduction to the subject of REST APIs built around a Case Study and so it quickly covers the theory of APIs and HTTP, driving APIs interactively from the command line, GUI tools and Proxies. And covers automating with REST and HTTP libraries with various abstraction layers.

And Dear Evil Tester is a book encouraging the reader to think differently about testing, to challenge their assumptions, to think for themselves, and to develop the attitude and mind-set of a Tester.

I basically write the books that I needed when I started learning the subjects.

Then I have a bunch of older books for free on my web site since they are slightly out of date, still useful information, but I don’t promote them any more.

3. Can you give us a sneak-peek into your session for Breakpoint 2020? (Just a teaser with some takeaways)

I guess the core is about thinking differently about automating, with some real world examples of using automated execution differently.

I see a lot of people saying don’t automate when the system is unstable, so I have a case study of why that seemed like the most appropriate way of approaching the testing of one of the applications I worked on.

Again, in the theme of “Evil Tester”. Thinking about what we ‘can’ and ‘could’ and how it ‘might’ help us, rather than what we ‘must’ and ‘should’ do, because everyone says that is what we do.

4. Have you worked on any side-projects recently?

I am always working on side-projects. Some are secret, and works in progress that might never happen.

But more are public and on my Github account.

Listed on my profile are a lot of test apps, I’ve written, for people to practice their testing and automating against.

I’m currently working on a Model Based REST API generator, called “The Thingifier” which currently can spin up a full API from a simple model of Entities and Relationships, complete with a GUI and Documentation. I will expand that to do more in the future. But at its most simple level it is a way of creating ‘practice APIs’ for learning how to test and automate APIs.

I also write applications to support my Digital Marketing, so I have a Twitter client called Chatterscan.com which is the only way that I read Twitter now. And I have some support tools for creating social media images and formatting TweetStorms. They are all listed on my marketing site:

And I have a lot of other tools that I don’t make public because I use them in my personal work.

5. What are you reading/learning right now? What made you interested in this?

This is because I have to do all the marketing for my own books and courses, and effective sales and benefit communication is one of the keys to successful bug reporting and change management.

6. What advice would you give to people who’re new to testing?

Get hands on as fast as possible. Test as many applications and different types of applications.

Make notes of everything that you do, as you do it, in enough detail that you can come back to it months later and understand what you were doing and thinking.

Keep a list of all the things you don’t understand.

Work through that list of ‘stuff you don’t understand’; search for it online, watch videos, and read blog posts, until you do understand it enough that you can use it as part of your testing.

Never assume that an application is so simple that you can’t learn anything from it. I keep going back to old practice applications I’ve written, to see how can I view them differently now, and how differently I can test them now, based on all the things I’ve learned since I last used it.

If you want to go beyond ’test apps’ to practice on, then sign up for Bug Bounty programmes like ‘Hacker One’, you might not find any security issues, but these are sites and environments that are giving you permission to test them.

Develop your own models of Testing so you can explain your approach, and the risks you identify, in your own words.