BDD and How to Manage Technical Testers

In January 2013 I hosted a session at the Test Management Summit 2013 on "How to Manage Technical Testers" and a tutorial on BDD. 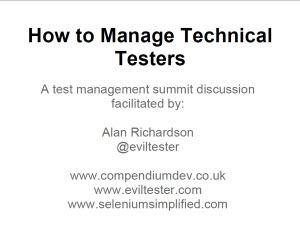 This was an opinionated overview of BDD where the underlying theme was that BDD involves the creation of a DSL.

I released the source code for all the examples to Github

How to misuse Automation for testing, fun and productivity

If you are interested in this then you might also find this Test Bash talk relevant How to misuse Automation for testing, fun and productivity where I expanded on the topic of Cucumber as a DSL Framework in addition to a BDD tool.