Support page for - Automating and Testing a REST API.

Automating and Testing a REST API 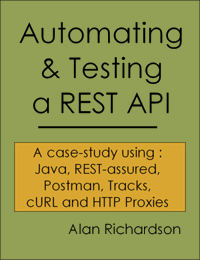 This 200+ page e-book documents a case study of testing and automating a REST API based application.

It covers interactive testing of the application through the GUI, and via cURL and HTTP Proxies.

And automating with Java and REST-assured.

Comprehensively documented, with full source code available, you’re sure to learn something new.

This is the support page for the book with links to the source, tools and the free supporting videos mentioned in the text.

Tracks is an open source application written in Ruby on Rails which implements the David Allen “Getting Things Done” time management methodology.

My current recommended approach is to use Docker,

You can install cURL on windows using:

see the videos below for each of these installation approaches

The easiest HTTP Proxies to use are:

You could also use:

You can find information about REST:

Tools not used in the case study:

Other libraries are available:

Lists of APIs to Experiment With

Fake APIs - i.e. these are api endpoints which serve canned data and responses

APIs designed for testing against

There is a video below showing how to install and use the source code.

The Postman Collection for the case study is available in the above source code and shared on the Postman site:

I created supporting videos for some of the chapters and sections in the book. These make most sense when read in conjunction with the book but offer a visual insight into tools used which the book can’t cover quite as well.

This is easy to install using Docker and this video shows the process in action.

The last time I used the Turnkey VM I used the VMWare Player 12 and used the following steps:

An overview of Tracks GUI

An overview of REST interaction with CURL

Using HTTP Debug Proxies as part of your REST testing

An overview of the Postman GUI client

In the video I show:

Other Blog posts and information you might want to read related to the material in the book, I include a lot of extra references in the book, but these were found after publication and I did not want to keep adding more links into the book, so I added them here instead, I also included a few from the book:

Ebook on sale at leanpub has had the following releases:

Paperback edition currently in proof creation and review mode. Will be the same as the 2017/07/03 release.

On 4th August 2017 I was told that Bitnami had discontinued the Tracks VM and self contained install.

I emailed Bitnami, just in case they could reinstate the installs but on 8th August I learned that the installs would not be reinstated. I suspect the following links will forever remain ‘discontinued’.

You should probably use Turnkey Tracks installers and VMs (but see the additional information below).

Stas Wasserman was kind enough to describe some additional information and workarounds on the Turnkey install: