In this podcast we share tips on how to get a job in Software Testing. 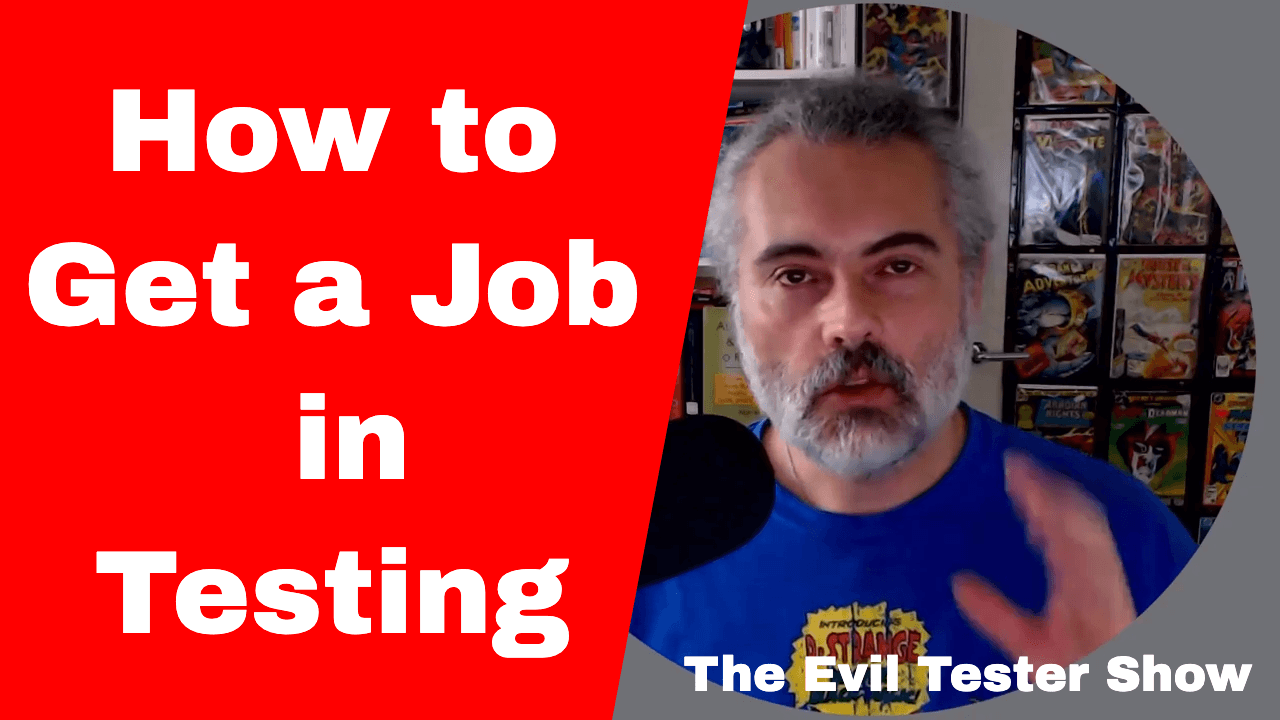 NOTE: this is not a transcript, there is additional information in the audio and video.

This was released early to Patreon supporters, with a full transcript. on Monday June 22nd 2020

So all I can really tell you is what I look for, when I’m involved in recruiting testers.

I wrote a linkedin post on “Should testers learn to code?”

It is possible to test things without being able to code. Testing as a general activity does not require learning to code. If you don’t know how to code then are limits to what you can use as inputs to your testing, and you probably won’t automate with code. There are things you can’t do.

I don’t really do Accessibility Testing because that requires specialist knowledge that I haven’t picked up. I use tools to help me.

Testing does not require the ability to code. But if I want to automate in code then I need to be able to code.

But like accessibility testing, there are tools I can use to automate, even if I don’t know how to code.

Testing and Coding are separate knowledge bases. They have overlap.

Many of the comments on linkedin were ‘Testers must be able to code’. Some people might have meant that you can’t Test without being able to code. But I think most people were saying that if you want to get a job in Testing, then you need to be able to code.

So they are commenting on their work experience. And they are saying that they don’t recruit people who don’t know how to code.

Difference between Testing, and getting a job in testing

There is a difference between “Testing” and “Getting a job in testing”.

Getting a job, in some environments, requires more skills and experience than what we would consider as pure testing skills.

If we choose not to learn to code then there are paths our career can take.

There are security testers, who don’t know how to code, they may eventually learn because it is helpful, but they may not start knowing how to do that. Certainly all the security defects I have raised, and I’ve raised plenty, and even been paid bug bounties. I didn’t need to code to find.

We don’t need to code, to be able to test.

if we need to automate then we can:

We don’t need to code, to be able to test.

But Getting a Job in Testing, is different from “Testing”

To get a job

To get a job you have to:

Getting a job depends on:

A whole bunch of things, mostly unrelated to “Testing”

You might hear people say that you have to learn to code to get a job in testing, but that isn’t necessarily true.

There are absolutely companies out there that:

Hiring is fundamentally broken for a whole bunch of reasons.

How to increase your chances of getting a job

I’ll tell you what I look for, and why I look for these things.

I look for people with experience of having tested things, and who are intereted in testing.

Even if I was looking for someone junior, that I was going to train from scratch. I would want them to have experience of testing things.

So to increase your chances of getting a job

And because we can’t fit all of that on a CV, I tend to be biased towards recruiting people who have that written up somewhere:

I look for people who are interested in testing. Not people who want to use testing as a stepping stone to get into development or project management or IT or anyone that thinks testing is the easy way in.

I look for people that are interested in testing.

Often we can’t reveal publicly the work we do for companies. So that means you’ll either:

There are plenty of ways of communicating your testing experience.

I’m biased towards recruiting people who test, communicate how they test, and are learning about testing.

You have to be in the right place at the right time.

So I’ll put together a job spec, and put all of that in. But I know hiring that person will be hard.

And I might find someone that is a pretty good match, but not completely, but if they could work with someone else, then we would have the skill set required.

So the second person I hire may not need to be able to automate, because they can now work with someone who does. But it is based off the same role and same job spec.

Luck is a factor in all of this, at the right time.

But some roles I won’t compromise. I know what the team needs. There is only one position available. We don’t have time to train them. And that might mean that I would only recruit someone who can test and automate. But also be aware, that I wouldn’t be recuriting someone with only coding skills, and I wouldn’t be recruiting someone with weak coding skills.

If you are interested in coding then you might even find it is easier to get a job as a programmer than a tester, because there is usually a narrower set of mandatory skills required, and you can more easily demonstrate your capabilities on Github.

And that’s what makes this hard.

You get hired, when you have the skills that the employer needs. And you are able to sell those skills to the employer.

So the only universal thing we can say about getting a job is:

But luck and persistence is also involved.

The way to get a job in testing, is to build your skills, develop the experience, demonstrate your experience, and keep applying for jobs.