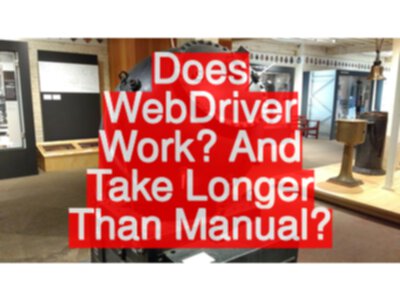 Does WebDriver Work? And Take Longer Than Manual?

TLDR; Question: Can selenium be used for real world testing? And does it take longer to create different scenarios/permutations than just testing the system manually? A: Yes, Probably

I received the following Question via email from a reader, and since the answer expanded, I moved it to the blog.

Can selenium be used in testing real world scenarios? And would spending time programming selenium to create different scenarios/permutations take longer than using the system manually creating scenarios through exploration?

“Question: can selenium be used in testing real world scenarios?”

Yes. I, and teams I work with, use Selenium WebDriver in the real world for production work and to implement user scenarios.

Generally, Yes. Exploratory testing of the system app and interacting with it will likely take less time than automating that interaction.

At least in the short term. But how many permutations are you talking about?

At some point, the physical interaction would probably take longer than the automated interaction.

And where are we considering adding permutations? Data? Flow?

We have a bunch of “What ifs” to consider:

It can be done

And all while the system is changing regularly.

Sometimes the automated approach has taken longer than the manual effort, but over time, had we continued to interact with the same scenarios manually we would either have had to not cover those scenarios, or perform those scenarios at the expense of covering other areas of the system. So automating it seemed like the right thing to do.

Sometimes the effort of automating the system seemed to take far too long given then short term nature of the product and the automated code was dropped in favour of manually interacting with the system.

We have to make choices when we choose our test approaches. And hopefully, with experience, we can learn to choose the most effective balance between manual interaction or automating without pursuing the wrong path first, wasting time, and then changing approach.