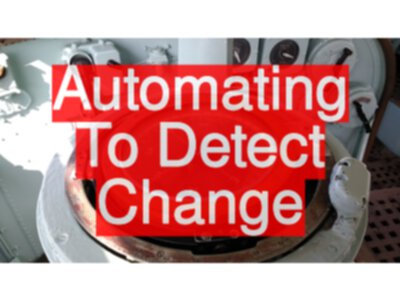 Much of “Test Automation” falls into the set of “Automated Execution to Detect Change”, in this post I will explain what that means and provide some examples.

Much of the automated execution code that I create detects change.

The CHANGE detection is implemented through assertions in the code.

I took the concepts of Amplify, Absorb, Attentuate from the writings of Stafford Beer on the Cybernetics of Management.

When our code detects change it can:

The assertion below Amplifies the change. If the assertion fails, something has changed, the test throws an exception and the build fails.

The location strategy below helps absorb the impact of change to the link text e.g. it could be:

Other absorption strategies include:

The point is we allow ‘some’ change, to not impact the test.

Abstraction layers can help us absorb the impact of change because they often isolate the change to a single place in the code e.g. a locator strategy for a menu item changes, but we only have to change the locator in a single ‘menu’ abstraction.

Retry strategies on intermittent tests can absorb issues with our synchronisation or automating approach. We might also view this as a way of attenuating the signal that our approach to automating is less effective and might be introducing risk.

The code below Attenuates the change e.g. we hide the assertion if the button cannot be found.

We might find attenuation code in the form of:

Attentuation is less likely to be found in Automating for Change, but might be found in general process Automating where we might report warnings instead of failing something, or just ignore errors because the point is to keep putting on load, rather than stopping the execution on failure.

Automating for Change Detection is not always for the purpose of Test Automation.

Consider the following @Test method which I wrote recently.

I wrote it to help me investigate functionality in WebDriver 4, and to alert me to potential specific changes in the library.

The ‘failure’ is not ‘bad’. The failure is an amplification of a change, it is additional information that I can then use to expand the scope of tooling options available to me.

This is not a condition that I want to use for ‘acceptance’ or ’evaluating the quality’ of a product so doesn’t really fit into a “Test Automation” strategy.

Other Amplification and Absorption Approaches

Many build and release tools Automate a process and Amplify changes.

But not in the context of “Test Automation”.

Attenuation often appears when we haven’t thought thoroughly about the need to Amplify or Absorb change.

When we automate for the purposes of asserting on conditions.

We find it easy to review the code to see if we are detecting the ‘changes’ we want.

We do this by reviewing the assertions in the code and seeing if they match the scope of conditions we want to be informed of change.

When reviewing the code we can also review in terms of:

Attenuation and Absorption often overlap. We need to take care to ensure that important changes are not hidden by that intersection.

In the test that follows you can see that:

In the above code, ‘Driver’ is a factory class I use which provides me with the current driver, and it knows what type to use from a property, so I can check what type of browser I’m using, e.g. IE, Firefox etc.

If the catch block is entered then the code throws an exception when the browser is not IE, because it only expects IE to enter the catch block, so if any other browser does then it is a change in behaviour of Selenium WebDriver that I want to be informed about (hence the exception to fail the test).

If the try block carries on, after the assert then the code throws an exception when the browser is IE, to alert me that the behaviour in IE has changed. In the version of IE that the test was written against, IE would always enter the catch block.

The actual test code itself is the assert in the middle, which would still ‘fail’ or ‘pass’ for different browsers.

Really this was a workaround for a limitation in the IE driver at the time, and the try/catch block was there to alert me when the IE Driver changed to allow access to elements in the <head> of the page using CSS selectors. (Which it now does, by the way).